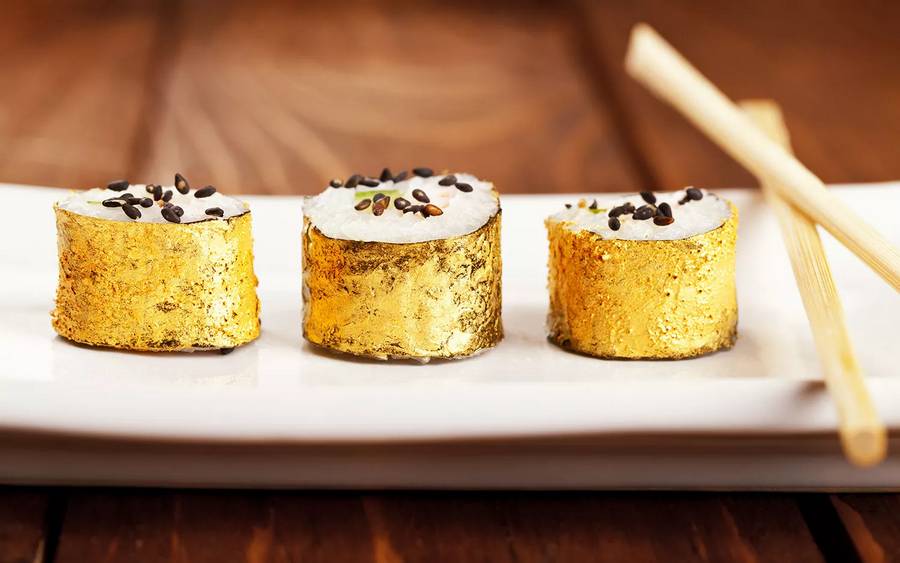 Instagram recently turned golden sushi and donuts into extravagant, viral sensations, but humanity has long had an appetite for shiny, malleable metal. While you’re dazzled by the glittering gold flakes suspended in a cocktail, or the delicately stacked gold leaf surrounding your tart, one thought may come to your mind: “Can I really eat gold?”

Or, if you’re like me, the question is: “Why eat gold?”. After all, it basically has no taste.

However, for centuries, thin sheets of pure gold have been used as a garnish in European baked goods and added to Japanese green tea. As far as we know, no one has died from gold poisoning (with the exception of the lady from the James Bond movie and the Targaryen dude from the Game of Thrones). I asked a couple of nutrition experts, New York registered dietitians Alexandra Oppenheimer and Cynthia Sass, for their opinion that gold can be harmful to your biology.

Oppenheimer notes that when you eat gold, you are not eating your wedding ring. “Edible gold should be 958 or 999,” she tells me. “This is not the kind of gold that is used in jewelry, because gold from jewelry can contain other metals and can be toxic and dangerous if consumed.” Gold used for edible purposes is known, at least in Europe, as E-175, which is the designation given by the European Food Safety Authority (EFSA) when the metal is used as an additive or food coloring. The performance and safety of the E-175 was first evaluated back in 1975 and re-evaluated by EFSA in 2016.

According to the latest conclusion, gold leaf should be 90 percent pure gold, with the remaining 10 percent usually made up of another safe metal such as pure silver. Assuming your gold has passed the test (and, frankly, from all the information available, the gold leaf currently sold as “edible” has actually passed the test), it won’t do anything to you. Scientifically speaking, gold is chemically inert, meaning it does not break down during digestion. “Most likely, edible gold will not be absorbed from the digestive system into the blood, and therefore it will pass through the body and be excreted as waste,” Sass explains. “But it can depend on the size, amount and frequency of use.”

And this is where research on gold as a dietary supplement hits a small hurdle – the hurdle is the near-absence of any research.

The EFSA cites a “lack of data on the toxicity, purity, and exact nature of gold used in food.” So to fill in the gaps, they duly turned to gold dentures. Since gold has been widely used in dentistry for decades, we know that its effects on the body, at worst, cause rashes in people with hypersensitivity to this metal. Gold particles are indeed found in the saliva of people with gold teeth, so it can be assumed that these people ingest the particles and this does not cause any harm.

Another use of ingested gold is in medicines that have been used homeopathically throughout history, but also pharmaceutically, such as in the treatment of rheumatism. In the latter case, gold is used in combination with sulfur and phosphorus as a kind of drug delivery system, and some studies show that the precious metal has anti-inflammatory properties. The only danger gold can pose at the level of nanoparticles, when it can destroy cells when injected directly into them in laboratory experiments. However, since the gold nanoparticles are too large to penetrate the cell membrane, this danger is practically non-existent. The EFSA findings indicate that liquors like Goldschlager may contain suspended gold nanoparticles, but again, they are not capable of doing you much harm.

By now, you may have noticed that everything mentioned above about the safety of gold as a dietary supplement is from European studies. In fact, the U.S. Food and Drug Administration (FDA) has no guidelines for gold consumption, due in part to a lack of requests on the subject (although they tell you to make sure you don’t eat inedible metals on your muffins). The closest thing to the official position of the United States is the Center for Disease Control, which does not call gold a poison. So here it is: gold is not poison.

However, it’s probably best not to include gold in your daily diet. Since it is not well-researched, let it decorate your food only on rare special occasions.

TOTAL: Good news! Most likely it won’t harm you. Bad news! Until more research is done, we’ll have to keep saying “probably”.