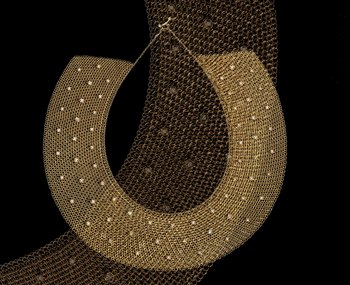 “I felt like I was proving my existence… using different houses and objects,” said jewelry designer Elsa Peretti. “I am in the business of crystallizing the form.”

Peretti’s career began with her travels as a model in the late 60s and early 70s, when she was the inspiration for the Helmut Newton and Halston brand. After she stumbled across a very thin sterling silver flower vase at a flea market that she wanted to wear as a necklace, she began to contemplate the idea of ​​setting up a silversmith shop in Spain.

Her first creations were instinctive and dark, inspired by animal skulls, scorpions and even x-rays of her own skeleton. In 1974, she began working with Tiffany & Co. as a designer.

In the same year, Peretti visited Jaipur in India, and the brilliant light of this city made her want to work with the grid. Jewelry brand Halston debuted a gold mesh bra and scarf. Peretti created them for Tiffany, including them in the fall 1975 collection. These items were made on old equipment used to produce handbags and chain mail from thin metal mesh at the beginning of the 20th century.

The mesh design has become a real hit. “Tiffany was inundated with orders from those who needed gold bras to death,” recalls Peretti.

Over the years, she has expanded her collection of mesh products. It began to include chain mail earrings, silver-wire woven evening bags and, most memorable, a flexible gold mesh collar that first appeared in 1997.

Free-form and fluid, it wrapped around the neck like fabric and was set with dewdrop-like diamonds. Reappearing in 2020 in yellow gold and studded with 66 hand-placed diamonds, this piece weighs 3.72 carats.

The design has remained largely unchanged in the two decades since its first introduction. Peretti, who is now 80 years old, has lived in New York, Italy and Catalonia for the past 40 years. She continues to create new mesh products. Both diamonds and cheaper emeralds are used in these products.

“Elsa defies everything you imagine when you think of jewelry. Her work, it’s art, it’s sculpture, it’s something you can sometimes wear,” says Reed Krakoff, artistic director of Tiffany & Co. “Her work is as fresh today as it was when she first created them. Her products survive time.