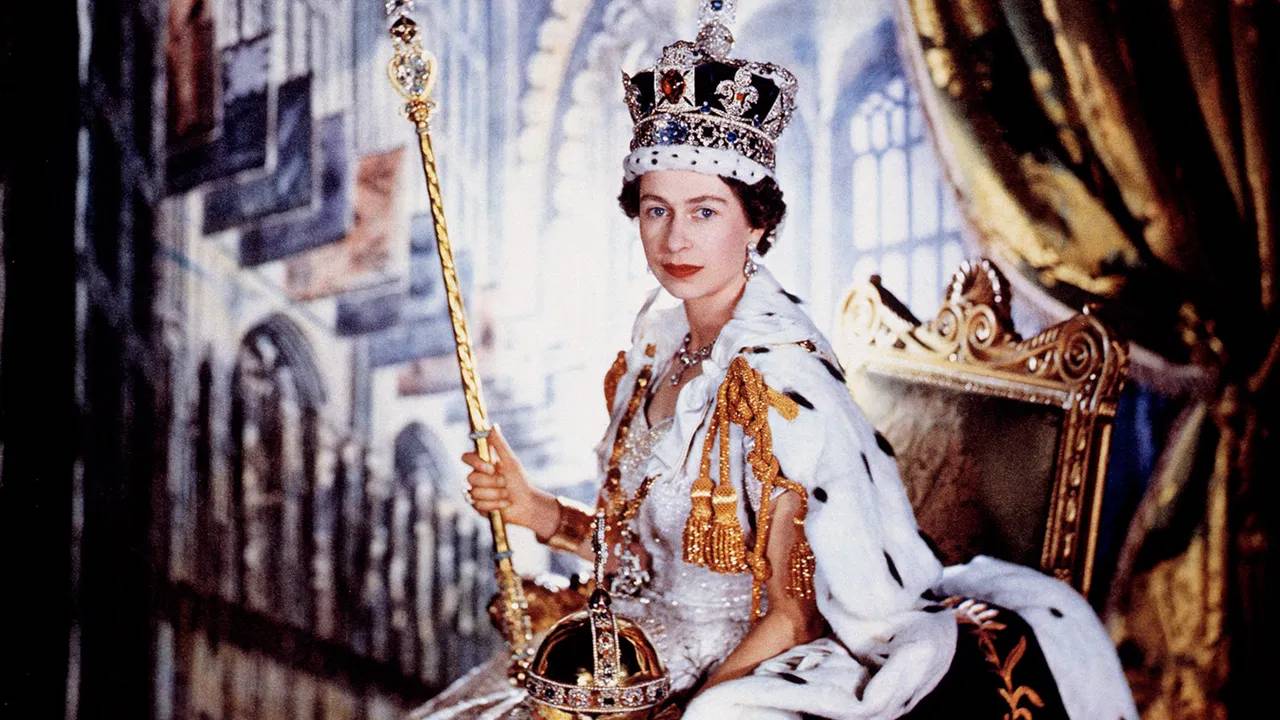 The British royal family is known for having one of the largest and most expensive jewelry collections in the world.

But many are unaware that the main piece of the crown jewels – the crown of the Imperial State – contains a gem that is not quite what it claims to be. 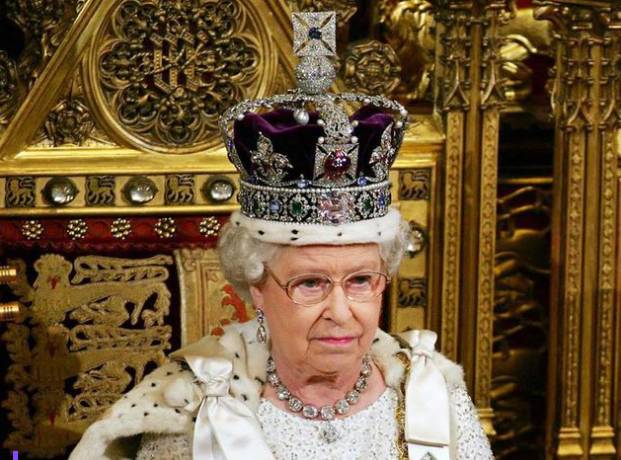 Queen Elizabeth wears the Imperial State Crown at the State Opening of Parliament in 2006.

For hundreds of years, the stone known as the Ruby of the Black Prince was considered to be a ruby.

It’s actually a spinel, a gemstone most people have never heard of, but just as red, and in some cases even more expensive, than the ruby ​​it looks so much like.

Gemology expert and Associate Director of Sotheby’s Diamonds Europe Alessandro Borruso once called spinels a “great impostor” in an interview with The New York Times.

This is because until the advent of new technology in 1783, it was believed that spinels and rubies were the same stone.

Spinels can be as red as a ruby, and in some cases even more intense.

They can also be found in the same mines, further adding to the confusion. 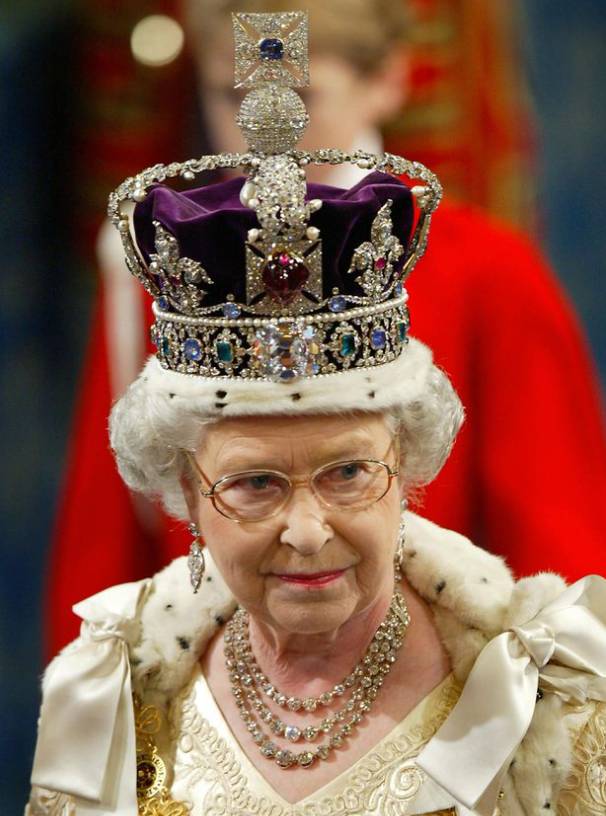 Queen Elizabeth II, wearing the Imperial Crown, walks in procession through the Royal Gallery on her way to deliver a speech during the grand opening of Parliament in 2002.

Ruby of the Black Prince

One of the world’s finest examples of a spinel being mistaken for a ruby ​​can be seen in the Imperial State Crown worn by Queen Elizabeth for 70 years.

The crown is part of the British Crown Jewels, a collection of 100 items and over 23,000 gems that have been guarded in the Tower of London since 1600.

The magnificent Imperial State Crown, made in 1937, is set with a 317-carat Cullinan II diamond, the second-largest clean-cut diamond in the world.

The Ruby of the Black Prince is a red stone in the center of the crown, set in the heart of the cross.

On the back is a large oval sapphire known as the Stewart sapphire. 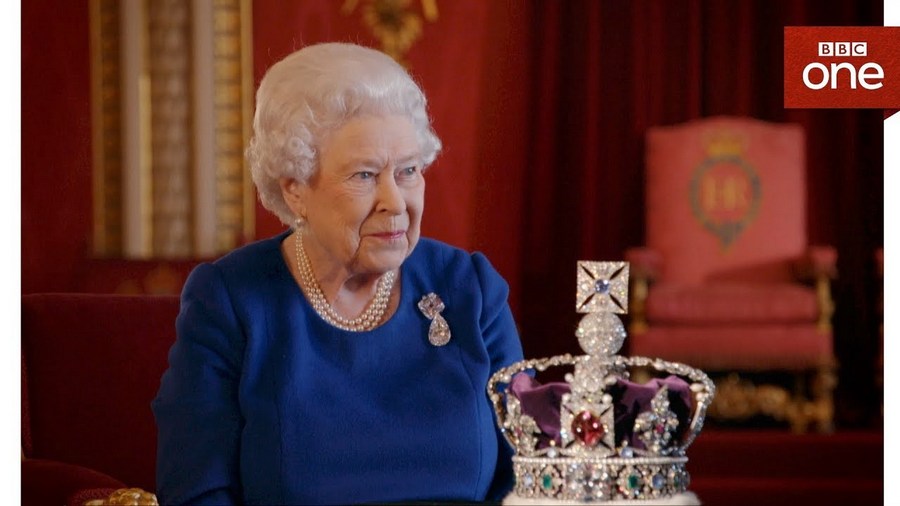 The Imperial State Crown, also known as the State Crown, is the crown that the monarch exchanges for the St. Edward’s Crown at the end of the coronation ceremony.

Queen Elizabeth wore the crown at the State Opening of Parliament, but as of 2019 the heavy crown (it weighs over one kilogram) is carried and placed on the seat next to the monarch.

The Queen once described the crown as follows: “You can’t look down to read a speech, you have to raise the speech, because if you do, your neck will break – it will fall off,” the Queen said in the documentary.

This Garrard-designed crown was made for the coronation of King George VI in 1937, but it is largely based on the crown created for Queen Victoria in 1838 by the then crown jewelers Rundell, Bridge & Rundell.

The crown is adorned with several historical stones with many legends associated with it, including the Stewart sapphire, Queen Elizabeth I pearl and the Black Prince’s ruby.

Portrait of Queen Elizabeth II taken for her coronation in 1953.

Traditionally, it was thought to have been a ruby ​​given to Edward, Prince of Wales, son of Edward III and known as the Black Prince, by Don Pedro, King of Castile, after the Battle of Najera near Vittoria in 1367.

The 170-carat stone is of oriental origin and was drilled in the past for use as a pendant.

According to legend, he crossed over to Spain around 1366, where Don Pedro took him from the Moorish king of Granada.

In 1415, it was one of the stones worn by Henry V in his helmet at the Battle of Agincourt. 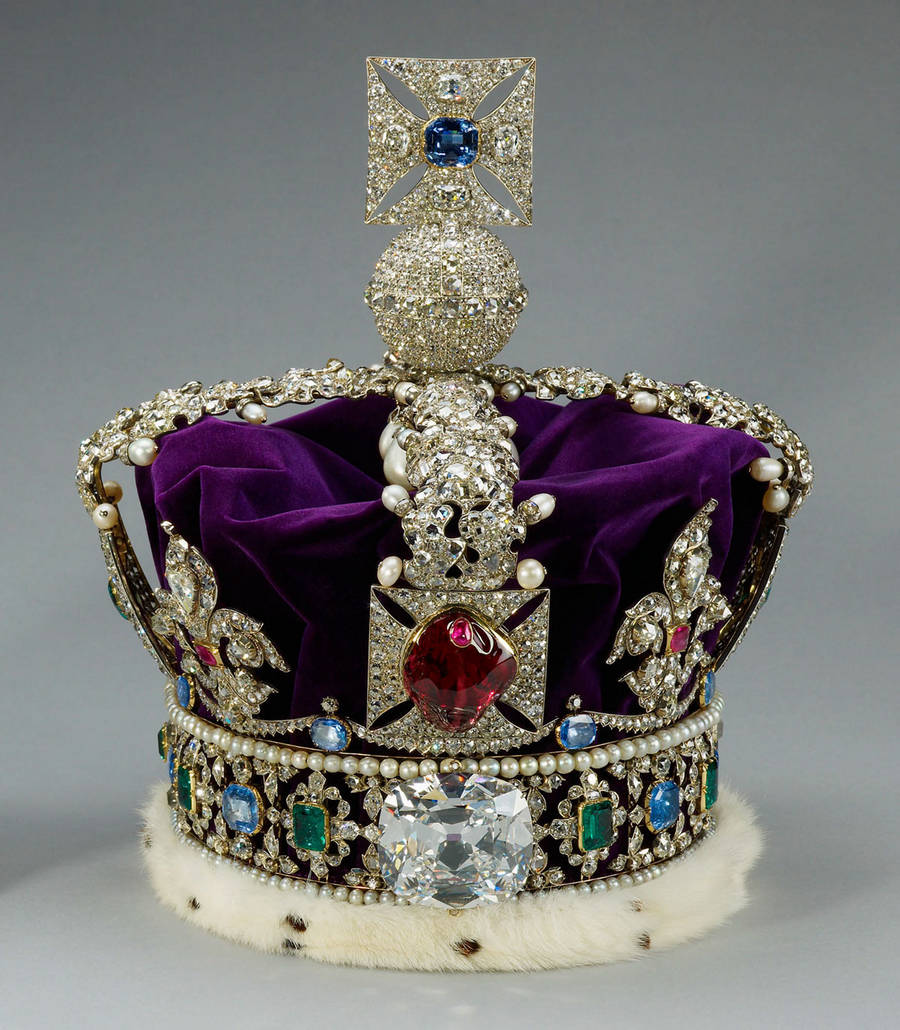 A close-up of the Black Prince’s ruby, which is actually a spinel, above the Cullinan II diamond set in the Crown of the Imperial State.

It is difficult to prove that this is indeed the same stone, but spinel definitely appears in the descriptions of historical state crowns, and every time the crown was remade, it was reinstalled.

Spinels were used in jewelry throughout the 1800s and early 1900s, but their popularity declined after World War I when diamonds and emeralds were favored.

But they had a resurgence in the 1980s when large bright gemstones came back into fashion.

In June 2016, spinel was added to the official list of birthstones and joined the yellow-green gemstone chrysolite as August’s birthstone. 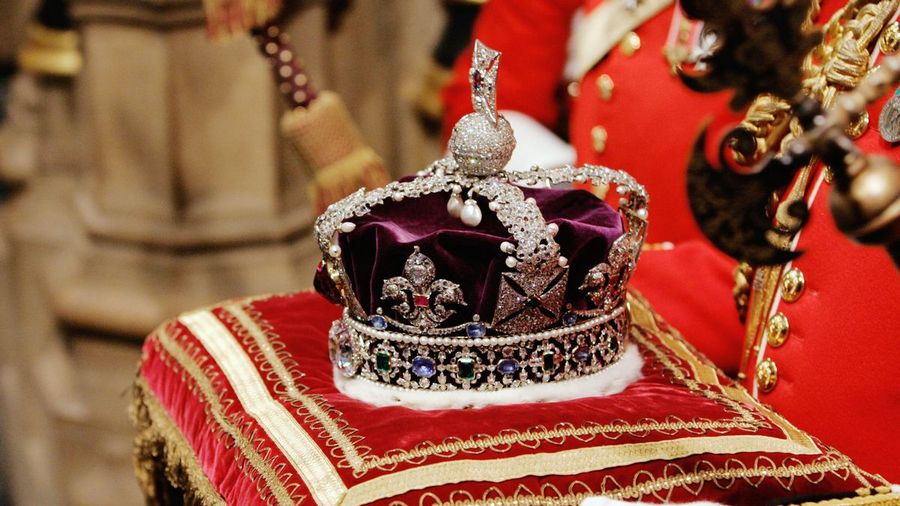 The decision was made by Jewelers of America and the American Gem Trade Association “recognizing the importance of historically significant gemstones and providing gemstone lovers with a choice that suits their preferences.”

This was only the third update of the list of modern stones since it was created in 1912 by the American National Retail Jewelers Association, now known as JA.

“Ancient gemstone dealers revered spinel and it was in high demand among royalty,” JA CEO Doug Hacker said at the time.

“It wasn’t until the late 18th century that we developed the technology needed to distinguish spinel as a separate mineral from ruby.”

The British royal family has another large piece of jewelry that was thought to be made from rubies.

The Timur Ruby necklace with three large spinels was made for Queen Victoria.

Its 361-carat center stone belonged to several Mughal emperors and arrived from Lahore in India in 1849.

The stone was brought to the UK along with the Koh-i-Noor diamond, which remains the most controversial gem in the royal family’s collection. 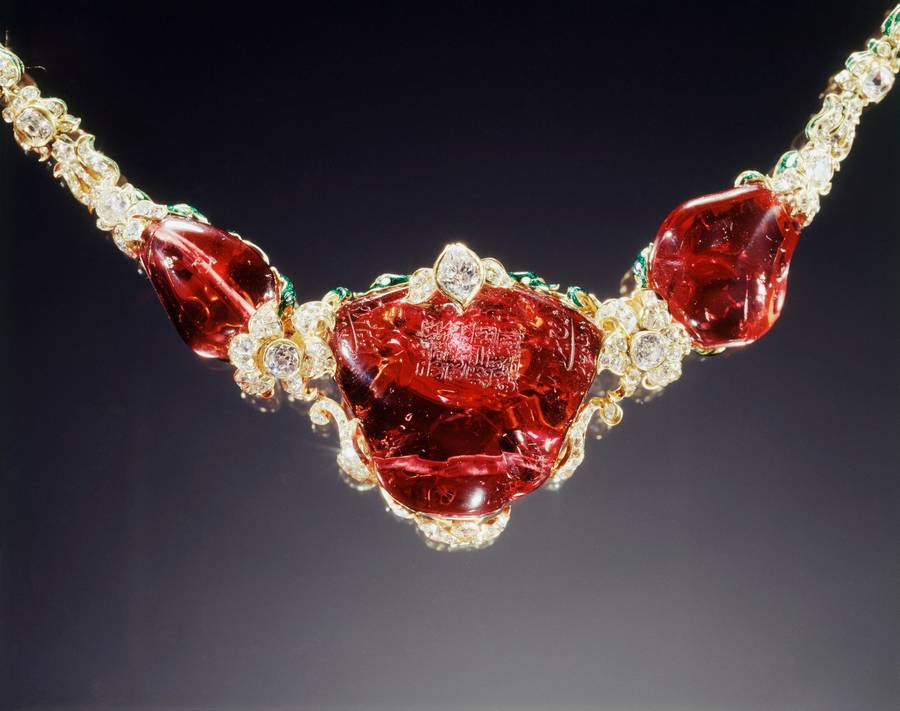 Close-up of the Timur Ruby necklace, which is actually three spinels made for Queen Victoria.

The Timur necklace was made in such a way that the main stone could be replaced with a Koh-i-Noor diamond.

But the Timur ruby ​​was rarely worn, and now, due to its dubious provenance, it remains locked away and was never worn by Queen Elizabeth.

In the 1969 documentary film Royals, the queen was filmed wearing Timur’s ruby ​​and called it “a charming necklace”.

The Black Prince’s Ruby and the Timur Ruby are not the only known spinels in royal collections.

In Denmark, Crown Princess Mary wears only four tiaras, and one of them is adorned with many bright red spinels.

The Edwardian tiara was bought by Crown Princess Mary at auction in 2012 and is one of the most special pieces in her collection. 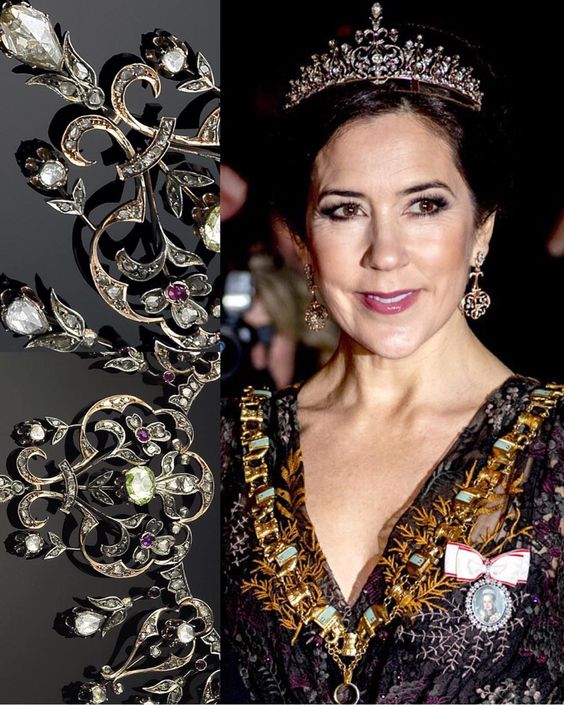 Mary refurbished the set and wore it for the first time in 2015 and has since worn the tiara many times, including at the Royal Family’s New Year celebrations and at her husband Crown Prince Frederik’s 50th birthday celebration in 2018.

It is also adorned with red rubies and spinels and is made of gold and silver, which is typical of Edwardian jewelry.

Crown of Catherine the Great

In Russia, the Great Imperial Crown of Russia was commissioned for the coronation of Catherine the Great in 1762.

The centerpiece of this crown is a huge red spinel weighing 412 carats, which sits at the very top.

The crown is adorned with 4,936 diamonds and 75 pearls, and since Catherine, every Russian emperor has worn it at his coronation. 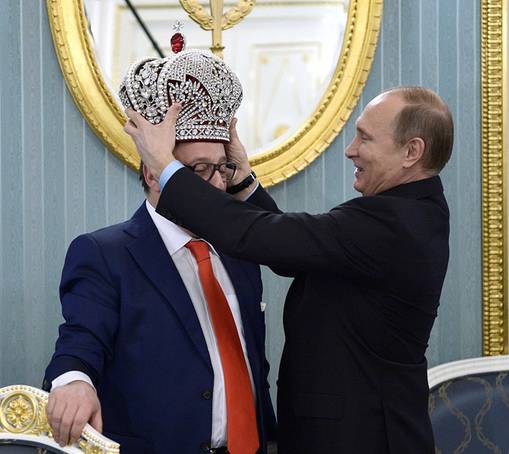 Vladimir Putin with a replica of the Imperial Crown of Russia, as the original never leaves the Kremlin Armory.

It was last worn by Tsar Nicholas II in 1896, the last Russian emperor to be executed by the Bolsheviks after the October Revolution in July 1918 that ended the Romanov dynasty.

The crown is now kept in the Kremlin Armory and is one of the few pieces of jewelry associated with the Romanovs that has not been lost or sold to collectors.

Two other famous royal spinels were part of the royal jewels of both France and Iran.

The Côte de Bretagne is a 105-carat red stone carved in the shape of an oriental dragon and originally adorned the insignia of the Order of the Golden Fleece, part of the French Crown Jewels

For centuries it was thought to be a ruby.

During the French Revolution, the jewel was stolen, later found in London and returned to France. It is now exhibited in the Louvre.

Samara spinel weighing 500 carats, considered the largest spinel in the world, was taken from India and became part of the Iranian crown jewels.

Now she is in the central bank of Tehran.