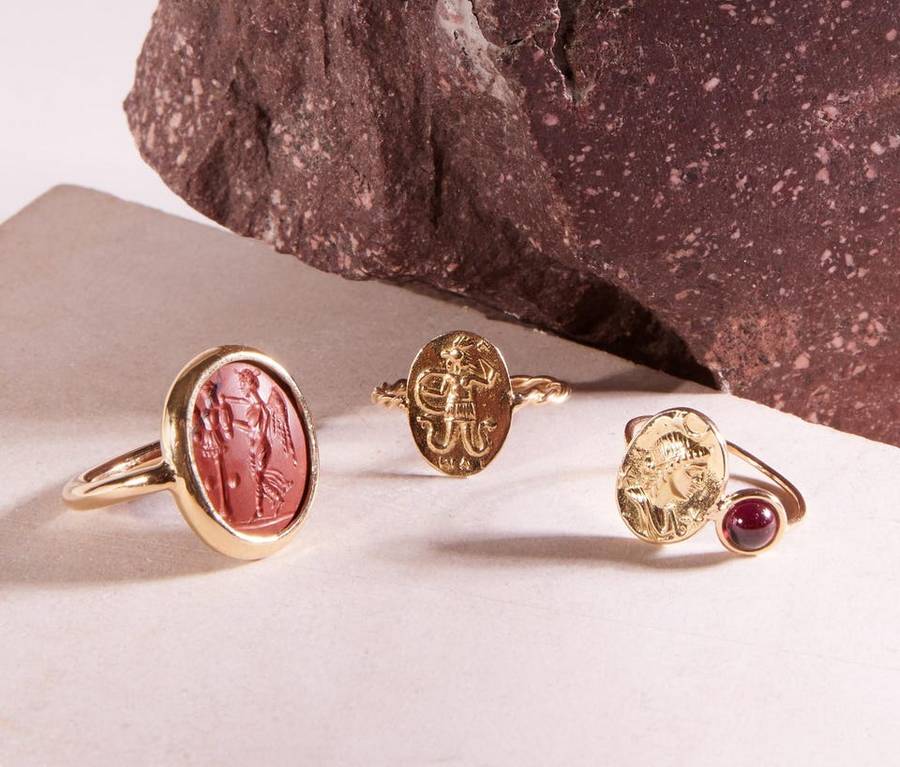 Intaglio, a jewelry technique opposite to its more famous relative, cameo, is a type of carving on hard stone that creates an indented image. Whether it’s reworking antique Greek and Roman stones, carving modern designs into modern materials, or creating an impression of an original intaglio, designers are using ancient techniques to create beautiful new jewels.

A form of glyptic art, intaglio is meticulous work on a tiny scale, usually using hand tools with emery powder to achieve a sometimes staggering level of detail. “I” was fascinated by the tiny world that intaglio opened up for me,” says Zoe Monnier of Pierres Paris, “and their exquisite combination of art and nature.” Antique intaglios are often found in semi-precious stones such as carnelian, agate, amethyst and garnet, while contemporary artists have begun using synthetic and lab-grown gemstones.

Historically, intaglios originated as signet rings, cut in mirror image to be impressed when pressed into a soft material such as wax. Historically popular were family coats of arms and portraits, as well as mythological and religious figures of the ancients, examples of which can still be easily found. They were usually set in gold or silver and used as a ring, but many of the intaglios found on the art market today are not set, indicating that their original settings may have been melted down in times of trouble and the intaglio stone reused.

Many contemporary jewelry designers continue this tradition of reuse, like Victoria Strigini, who reuses original intaglios in modern settings, or restores and decorates found jewelry, like Lauren Nicole. Others, like Australian glyptic artist Ryan Bowen, have mastered an incredible art form dating back thousands of years and created a new interpretation for our time.

London-based French designer Victoria Strigini has long admired antique coins and carved gems from history, and continues the custom of reusing antiques by picking up and re-encasing them in recycled metals. At the core of her work is the contrast between the fine details, hand-cut gemstones, and the clean, austere lines of the contemporary settings she creates for them. The Oeuf en Plat ring is an example: when a tiny engraved stone is set into the side of an egg-shaped ring that rises in a soft dome above the knuckle. And to further spread the story of these stones, the pieces are also made from recycled silver.

Australian glyptic artist Ryan Bowen came to engraving gemstones through dentistry: “I have always loved gemstones and have worked in the dental industry as a lab technician using similar tools and skills. I saw intaglio in the store and decided to try it,” says the craftsman from Sydney.

He was lucky: he now has clients all over the world who are looking for unique, finely crafted pieces. Using imagery often based on fantasy, rarely found in engraving, and modern materials such as yttrium aluminum garnet along with quartz, amethyst, ruby ​​and sunstone, he works to “bring the ancient art of intaglio on gemstones into modern era.

Designer Zoë Monnier came from the art world to launch Pierres Paris, a company offering Roman and Greek intaglios with a contemporary twist. Intrigued by the history and symbolism of these miniature works of art, she decided to create jewelry from them and launched her brand in 2016. In addition to restoring the antique intaglios she purchases from the art market, Zoe also offers unique imprint intaglios, casting the negatives of the purest intaglios she finds in 18K gold, in continuation of their original purpose as seals. The intaglio ring above depicts the Greek goddess of the moon, Selene, framed by a rich red garnet.

Intaglios are a recent addition for By Pariah, a London-based jewelry brand that celebrates the natural beauty of minerals and champions minimalist design. Founder and designer Sophie Howard was inspired by photographs of the Paria Peninsula in the Caribbean to show off the treasures of the land, and her brand is now best known for its hand-cut and polished semi-precious stone rings, with perfect curves and volumes and contrasting gold stitching. Featuring multicolored quartz, agate and carnelian intaglio, By Pariah pendants are equally elegant, featuring the golden Pegasus horse and can be paired with a recycled gold chain.