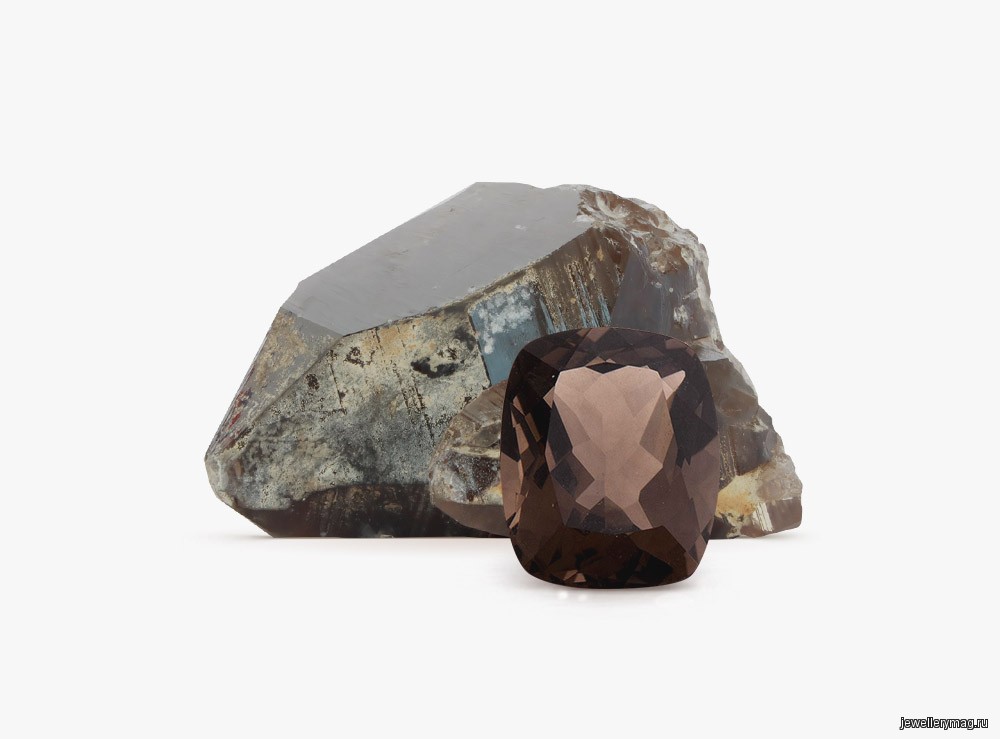 There are several names for this amazing semi-precious stone: kerngorm, smoky quartz, Scottish stone. However, it is important to note that despite the fact that it is best known under the name “rauchtopaz” – in fact, this stone has nothing to do with topaz. It is a quartzite, which is often found in nature.

Since ancient times, smoky quartz has been used in the manufacture of jewelry, ritual figurines, and religious accessories. Its unusual gray-brown color gave the products great showiness and mystery.

The colors of smoky quartz range from gray to dark grey-brown. Stones painted black are called morions. The smoky color of the stone is unstable, it completely disappears when exposed to high (more than 300 ° C) temperature. A slight alexandrite effect is observed – in the rays of the sun and under artificial lighting, the color of rauchtopaz can vary from greenish to purple.

The chemical formula of the mineral is SiO2. Sometimes impurities of aluminum and iron are possible. The luster of smoky quartz is glassy, ​​it has a high degree of transparency. The stone itself is quite fragile, but not bad scratch resistant: Mohs hardness – 7.

The formation of smoky quartz occurs in special geothermal conditions with the participation of aluminum and glands. The largest deposits of rauchtopaz are located in Brazil – more than half of all stones are mined here.

Fine examples have been found in the Alps, in the USA and in Madagascar. Although, it can be concluded with certainty that in one quantity or another the stone is present on all continents.

Healing and magical properties of rauchtopaz

It is believed that smoky quartz can help cure many diseases, both physiological and psychological. You can turn to rauchtopaz for help in the fight against alcoholism, suicidal tendencies and various diseases of the nervous system. In addition, the stone has a positive effect on the condition of the kidneys, adrenal glands and the reproductive system.

For smoky quartz to truly support human health, just wearing it in jewelry is not enough. It is recommended to hold large crystals of stone in the palms of your hands for several minutes a day. Jewelry with rauchtopaz is desirable to select those in which the stone has constant contact with the skin of its owner – beads, pendants, bracelets.

Smoky quartz is credited with powerful magical properties. Since ancient times, the stone was considered “dark”. It was often used in the rituals of black magic, summoned spirits, sent damage. It was believed that rauchtopaz absorbs everything evil and dark, and then can direct this negative energy to its owner.

If, however, smoky quartz is used for good, then it can direct equally powerful energy to creation and restoration. Rauchtopaz helps a person regain strength, cheer up and even get rid of bad habits and addictions.

Astrologers recommend that Scorpio and Libra wear jewelry and products with smoky quartz daily. The stone is not very suitable for the rest of the signs of the Zodiac, especially for constant wear. Cancers should not be in contact with rauchtopaz at all and even kept at home.

Rauchtopaz is also not recommended for children to wear. This stone is for adults, accomplished people who are able to direct his energy in the right direction.