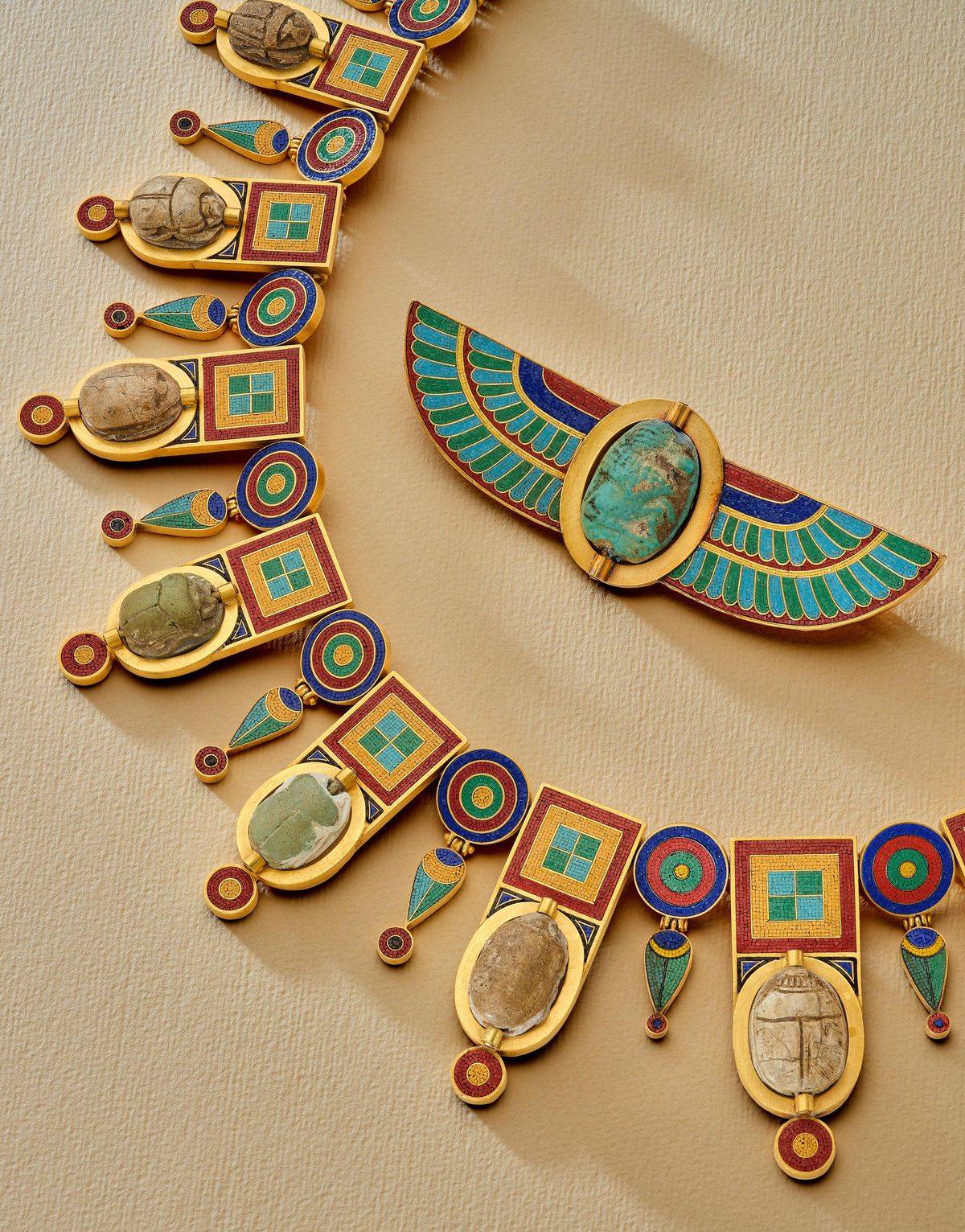 “As my eyes adjusted to the light, the details of the room slowly emerged from the mist, strange animals, statues and gold – gold glitter everywhere. For a moment—and it must have seemed like an eternity to the others who stood by—I was speechless with astonishment, and when Lord Carnarvon, unable to bear the strain any longer, asked anxiously, “Do you see anything?” – I could only say: “Yes, amazing things.”

“Glitter of gold everywhere.” This is what Howard Carter’s eyes saw when he first discovered Tutankhamun’s tomb in 1922, and the moment remains one of the most breathtaking archaeological discoveries in history. It also marks a turning point in jewelry design. Carter’s finds were the direct inspiration for the Egyptian Art Deco Revival, a period of bold and unusual designs that combined Art Deco geometric lines and a palette of diamonds and onyx with Egyptian iconography such as the scarab and phoenix, and stones such as turquoise, lapis lazuli and cornelian. Pieces from this period, from houses such as Van Cleef & Arpels, Cartier and Boucheron, remain among the most collectible on the market.

But, as the jewelers note, this was not the first Egyptian revival, and most likely not the last. This December, the Sothebys exhibition and auction offer a brilliant and sparkling reminder of when, how and why “Egyptomania” captured our imagination. Items from the earlier Egyptian revival of the 19th century, sparked by Napoleon’s campaigns, explorations of the Rosetta Stone, the Louvre exhibition of research and excavations by Auguste Mariette, and then the opening of the Suez Canal in 1869, will be on display in New York from November 30 and then sold at auction Sothebys Magnificent Jewels Sale December 7th.

Unique items from the personal collection of the 19th century goldsmith Castellani, whose Egyptian-style necklaces and brooches are more likely to be found in museums than at auctions, will be on display. And a beautiful example of Louis Comfort Tiffany’s bold look, a lapis lazuli, turquoise and carnelian necklace inspired by a personal trip to Egypt in 1908. This selection of rare Egyptian jewelry provides the general public with an insight into how history, archeology and travel have influenced jewelry design, as well as the rare opportunity to own one of these pieces.