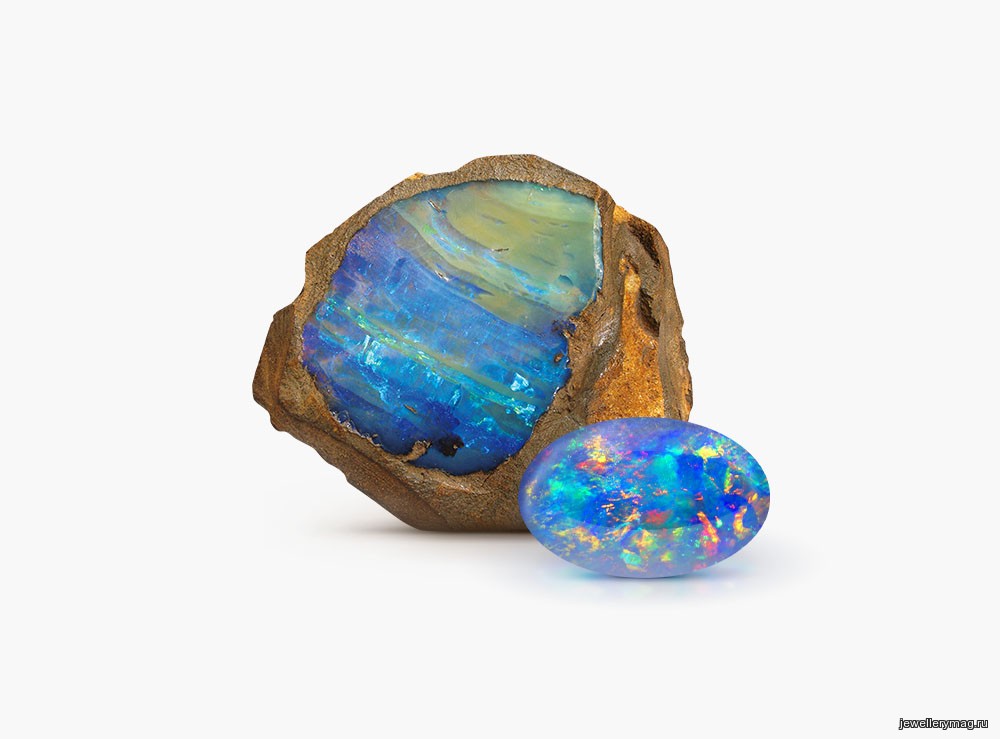 Story. Legends and myths about stone

Writers have compared opals to volcanoes, galaxies, and fireworks. Admirers and connoisseurs of the stone gave poetic names to unusual opals: “Pandora”, “Light of the World”, “Empress”. In ancient Rome, this gem symbolized love and hope. And it was the Romans who gave the mineral the name that we use to this day – “opal”, which meant “precious stone”.

In AD 75, the Roman scholar Pliny remarked: “Some opals carry such a play that they match the deepest and richest colors of artists. Others imitate the blazing fire of burning sulfur and even the bright flashes of burning oil. He was delighted that this kaleidoscopic gem included ruby ​​red, emerald green, topaz yellow, sapphire blue, and amethyst purple.

Opal was set in the crown of the Roman emperor Constantine, who claimed that this stone shines in the dark and believed that it protected his power and his life. In his numerous stories about opal, he mentioned one miraculous property of this stone, which allegedly allows the owner to become invisible. Naturally, because of this, opal became a talisman of thieves.

For a time, it was believed that opal could preserve the life and color of blond hair.

Opal is considered the stone of October. And some people think that this stone should not be worn by those born in any other month. But this superstition comes from a novel written in the early 19th century (Anna Geierstein by Walter Scott), and not from any ancient belief or experience. In fact, for most of history, the opal has been considered the luckiest and most magical of all gemstones because it can showcase almost all colors.

Opal is an amorphous form of silica, chemically similar to quartz but containing an average of 3% to 21% water in its mineral structure. Gem-quality opals most often contain 6% to 10% water.

Jewelry stone is afraid of sudden changes in temperature, strong cooling and heating. In addition, due to the high water content in their composition, opals cannot be kept in places with dry air – sufficient humidity is extremely important for them.

How opals are formed

Opal is a sedimentary stone. Under the right conditions, water percolates through the earth, enriching itself with dissolved silicates. When water enters the cavity, it precipitates silicates in the form of microscopic spheres, from which opals are subsequently formed.

If the silicate spheres at the base of the opal are the same size and shape, and stacked neatly on top of each other, they will scatter light. Such stones are called precious (jewelry) opals. If the spheres that make up the mineral turn out to be random in size, shape and location, then ordinary opals are obtained that are not capable of demonstrating outstanding optical effects.

Although the hardness of opal is above average, it is still brittle and can easily break if given enough pressure.

Often, opal occurs in the form of streaks or dense masses that resemble glass. Sometimes the stone is found in the form of stalactites. However, the fact remains unchanged that large deposits of this gem are found in volcanic areas, that is, where a volcano used to work or is still active. Below is more detailed information provided by the Gem Society resource on where and what kind of opals are mined.

Australia is the world’s largest source of opals. However, the deposits on the continent have been developed so intensively that they are rapidly depleted. It was in Australia that the largest opal in the world was found – its weight exceeded 5 kg, and its size was 23 × 12 cm.

Mexican opal is found in siliceous volcanic lavas, in voids, and in many other places. Yellow and red fire opals, hyalites and transparent precious opals of the highest quality are mined here.

Significant deposits of opals were also found in Brazil. It was there that in 1998 a stone was found, the total mass of which exceeded 4.3 kg. The stone was later valued at $60,000.

High-quality jewelry opals are often given an unusual shape in order to preserve and, if possible, emphasize unusual overflows and play of color as much as possible.

A source known in Roman times, near the village of Chervenitsa (formerly in Hungary), gives rise to opals in the form of layers in grayish-brown andesitic rock.

An ancient source of opals. Stones found near the town of Vegel Tena show a remarkable play of color.

First discovered around 1900 in Nevada, opal occurs here as cracks and seams in opal wood. Gorgeous but very watery, this opal has a strong tendency to crack due to loss of moisture upon contact with air.

In addition to the territories listed above, opals are mined in the following places:

According to Arabic legend, opals are what is left when lightning strikes the ground.

Jewelers value first of all noble ones, they are also jewelry, opals – almost all over the world it is customary to classify such stones as precious. They are distinguished by a bright pure color, a richness of shades and iridescent tints. This feature is characteristic of translucent stones, which are quite rare. It is noble opals that are usually selected to become part of a piece of jewelry.

Opal comes in a variety of colors, including: black, white, blue, purple (light and dark), green, red, yellow. Moreover, the play of color can be far from continuous, but dotted or mosaic. For this reason, there are a huge number of varieties of opal. The brilliance of the stone can also be different, for example, glass or wax.

Read also
How to distinguish natural opal from imitation?

Common opal is a term that encompasses many varieties of opaque or glassy opals with a waxy luster. These stones come in a wide variety of colors and are rarely cut.