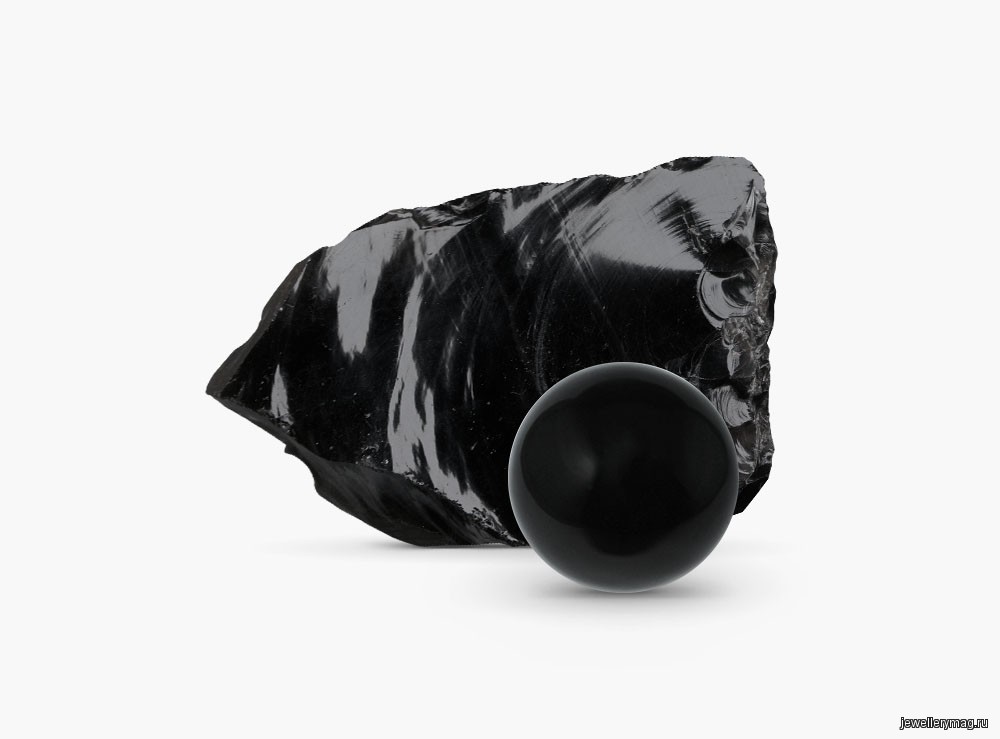 Obsidian has been known since ancient times. Tools made of volcanic glass, as this igneous rock is also called, are found by scientists during excavations at the former sites of ancient settlements. The thing is that this stone has a very sharp chip. Ancient Maya settlements made spears, stakes, and various ornaments from obsidian.

The findings of scientists show that high-quality stone raw materials were actively used both in the Neolithic and in the Paleolithic, that is, the last 15,000 years ago.

There are two theories about the name Obsidian. Some scientists believe that the word comes from the Greek “obsis” – “spectacle” (small mirrors were made of stone). Others claim that “Obsidium” is the name of the Roman who first brought this mineral to Rome.

Obsidian is a stone that is formed as a result of the rapid cooling of igneous rock. This is perlite familiar to everyone from the school course, only with a much lower water content – only 1%.

Chemical formula of Obsidian SiO2 is a glass-forming oxide with an acidic content. Obsidian does not conduct electricity. Color dark brown to black. Formed from flowing molten rocks, easy to grind. From the strips of stone, you can determine in which direction the magma flow was directed.

Obsidian is considered to be quite a rare stone. It is found only where there are ancient volcanoes, as well as in those places where archaeologists have discovered sites of ancient settlements. Such finds were in Russia, China and Japan, India, Azerbaijan, Kazakhstan.

The use of obsidian

Volcanic glass is a unique material for creating the perfect blade. The cutting edge is obtained at the molecular level, and this is not an exaggeration. This property was appreciated by gunsmiths experimenting with the composition of ceramics for the invention of super-sharp knives. The disadvantage is the fragility of obsidian. However, when used correctly, this is not a hindrance. The stone is used to create surgical blades.

Due to the fact that obsidian is highly polished, it is used in the manufacture of jewelry. Amulets, beads and talismans made of obsidian have been preserved since ancient times. Along with its other properties, this mineral is very beautiful. Black shiny glass with a variety of inclusions and stains looks spectacular on modern jewelry.

Decorative elements in the form of caskets, stationery stands, obsidian photo frames are original decor elements that will find a place in any interior.

The magical properties of obsidian

Obsidian is a powerful energy absorber and information keeper. Magic balls and mirrors are made from it in order to see the past and future of a person. And obsidian talismans are able to protect their owner, attracting all the negativity turned in his direction from strangers.

However, you need to be extremely careful with the stone. The stone turns evil thoughts against the one who conceived them. The wearer of obsidian jewelry should be extremely honest with himself, and then this stone is able to bring good luck.

What zodiac signs are obsidian suitable for?

Astrologers say that of all the signs of the zodiac, obsidian is ideal for Scorpios. This stone should also be carried by those who feel they have the ability to clairvoyance.

What stones do obsidian go with?

According to legend, the Roman warrior Obsidian survived the battle only thanks to the volcanic glass, which was eventually named after him. The imperial brought this mineral from Ethiopia to Rome, where it became an extremely popular protective amulet.

The rock formed in the crater of volcanoes is a representative of the Earth element. In addition to stones of the same element (jasper, turquoise, jade, agate ) the protective properties of the crystal increase the minerals of the element of Fire: garnet, hematite, carnelian, diamond. But in no case should you wear obsidian with a ruby ​​- the gems will overwhelm each other.

For meditation, a pair of obsidian and rock crystal would be a good choice. The combination of air and fire stone opens the chakras and stabilizes internal energy.

What metals does the stone match with?

Even in ancient Egypt, the priests used the likeness of obsidian scalpels for medical purposes. Best of all, the resin stone is revealed in a silver frame – this metal enhances the healing properties of the stone. The mineral is under the influence of Saturn and Pluto.

If you dreamed of obsidian

Obsidian in a dream indicates future changes in personal life. If a girl had a dream, she will be given signs of attention, if a man – it will not be long before the wedding.

If other people are present in a dream besides a stone, the dreamer will soon take part in a major celebration (wedding or birthday). If animals are also dreaming – to a meeting with an old friend. Since obsidian is also considered a stone of foresight of the future, such dreams should be taken as seriously as possible.

According to other interpretations, obsidian in a dream means secret anxiety. The dreamer is afraid of change, but he himself is unable to resist them.