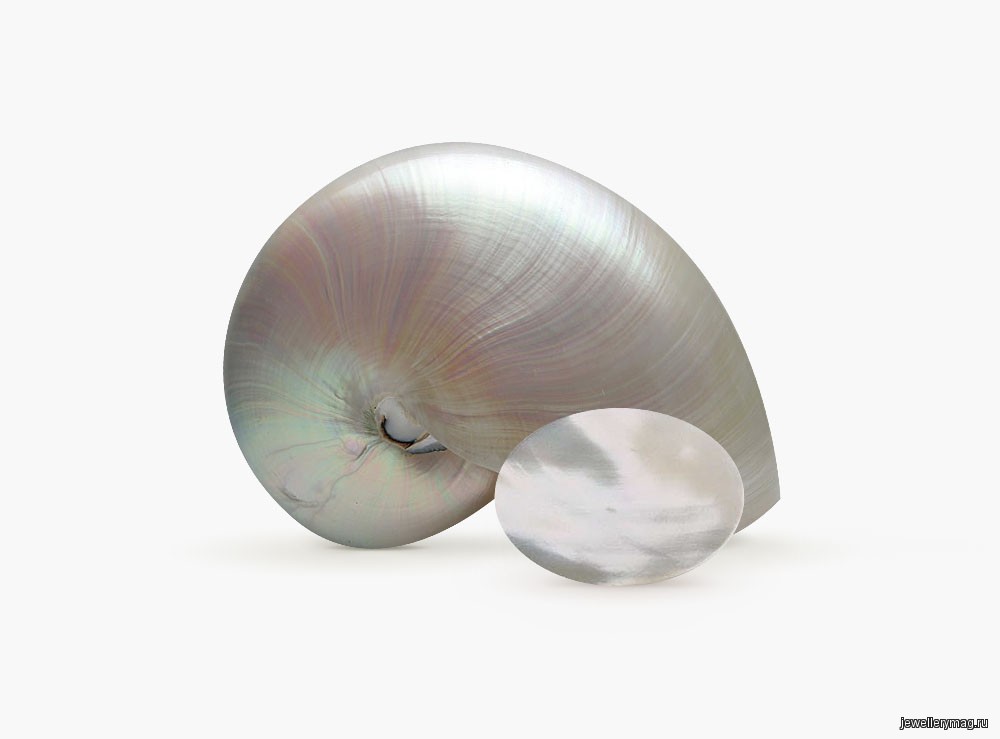 Mother of pearl is the inner layer of shells. The name is German and comes from two words: perl – pearl and mutter – mother. This unusually beautiful substance is accumulated inside their shells by some types of molluscs. Mother-of-pearl does not belong to semi-precious or ornamental stones, but is valued by jewelers along with them for its strength and extraordinary brilliance. Since ancient times, they have been decorated with furniture, various items for the interior.

I must say that mother-of-pearl, like pearls themselves, has been known to mankind since 2200 BC. Mentions of him can also be found in the Old Testament, the Talmud and the Koran.

Mother-of-pearl has an organic origin (an organogenic mineral). The main substance, as in pearls, is aragonite. Mother-of-pearl is calcium carbonate, presented in the form of tiny flakes stuck together by conchiolin. The water content does not exceed 3%.

The color of the substance deserves special attention. It comes in green, blue, pink, white, cream, gold, gray and even almost black. This diversity arises as a result of different refraction of light inside the aragonite flakes.

Mother-of-pearl is mined in the Persian Gulf, in the waters of the Red Sea, near Ceylon, Japan, Borneo, in the vicinity of the Philippines and some islands in the Pacific Ocean in the tropical region. In addition, there are real farms for growing cultured pearls. Mother-of-pearl is a by-product of this process and is actively used in various industries.

Areas of application of mother-of-pearl

As in ancient times, today, with the help of mother-of-pearl, the interior is often decorated. They encrust furniture, caskets, panels, fans and other household items. And, of course, as everyone knows very well, mother-of-pearl has found its application in jewelry. However, if earlier it was mainly combined with silver and other organic materials, then the current trend is the creation of bright jewelry collections in which mother-of-pearl is combined with precious stones, such as diamonds, emeralds, sapphires.

For a long time, mother-of-pearl has been used to create buttons, the keys of musical instruments, and even spoons for caviar. With mother-of-pearl make paints for painting.

Magical and healing properties of mother-of-pearl

Esotericists and sorcerers use mother-of-pearl in rituals as a source of energy. With its help decorate objects for rituals. This creates a certain environment. Unusual iridescent objects help to concentrate, enhance the impressions of the rituals.

In India, it is believed that water from a bowl covered with mother-of-pearl is a truly magical potion and is used for love spells.

Lithotherapists claim that mother-of-pearl powder can heal any ailment, especially green mother-of-pearl is famous for this. There is also an opinion that it increases immunity, activates the brain, and acts on the whole body as a powerful antidepressant.

Read also
What is pearl: types and their origin

Who suits mother of pearl

Astrologers believe that jewelry with mother-of-pearl of all signs of the zodiac is most suitable for Pisces and Aquarius: mother-of-pearl will give strength and self-confidence to the first, and protect the second from rash acts and help find your calling in life.