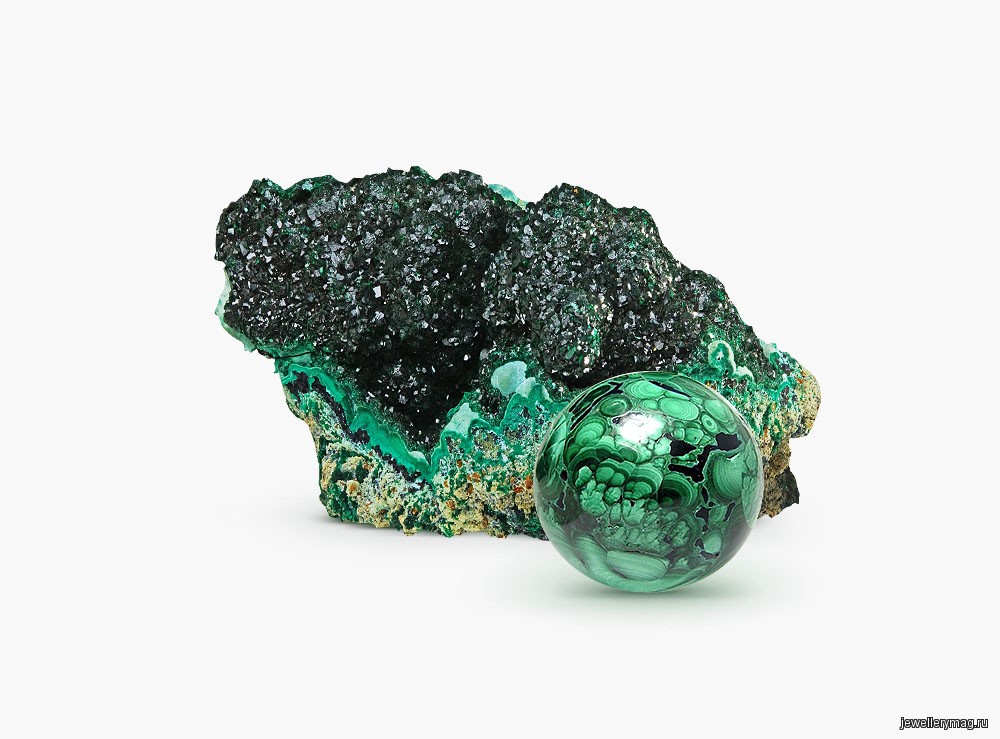 Now it is very difficult to say when the malachite stone was discovered. Mentions of it have been found since the time of Ancient Egypt. At that time, this mineral was associated with the name of the goddess Hathor, the patroness of the family, fertility and female beauty.

There are several versions of the origin of the name malachite. According to one of them, it comes from the word “mallow”, since the stone resembles the leaves of this plant. Another version says that the name is associated with the ease of processing the mineral, and is derived from the word “malakos”, which means “soft” in ancient Greek.

Physical and chemical properties of malachite

Before this mineral was used to make various crafts and jewelry, malachite was the main source of copper, as it is a hydrated carbonate of this metal.

The color range of malachite is represented by all shades of green: from light green to almost black. This mineral can be dissolved in acid. When placed in ammonia, the latter acquires a beautiful blue hue. Malachite can have both a glassy sheen and a matte finish.

In Russia, the largest and richest deposits of malachite are located in the Ural Mountains. In addition, scientists argue that rich deposits of the mineral that have not yet been found can be located in this area.

As for other countries, large mines for the extraction of malachite are located on the African continent, in the region of the Republic of the Congo. Unlike the Ural malachites, African malachites have more pronounced stripes and their light and dark shades.

How to distinguish natural malachite from a fake

The probability of finding products made from pressed malachite is low, since the process of making a fake is much less profitable than using natural stone. If doubts arose, then you can look at the picture. In natural malachite, it will be naturally concentric. This means that the stripes and circles are arranged in a circle. In a fake stone, the pattern will be interrupted.

There is, of course, another way to verify the authenticity of the stone – with a drop of acid. But in this case, malachite will be hopelessly damaged.

Read also
Malachite jewelry: the return of the style of the seventies

Healing and magical properties of malachite

The miraculous abilities of malachite in ridding the owner of various diseases have been known since antiquity. The stone is able to cure various skin diseases, as well as diseases of the bones and joints. It also makes breathing easier and relieves asthma attacks, improves eyesight and relieves toothache.

Other healing properties of malachite include the ability to stabilize the functioning of the digestive tract, facilitate the process of childbirth, and relieve depression. The most valuable in terms of healing power are stones of light shades.

The magical properties of malachite are also very extensive. In Russia, they believed that with its help one could learn to understand the language of all living beings, as well as receive the gift of invisibility, although the latter may seem somewhat naive today.

Modern experts are sure: if you constantly wear jewelry with malachite, it will strengthen the connection with your guardian angel, which will give strength and sharpen intuition. Malachite is able to protect against damage and the evil eye, improve sleep and get rid of nightmares. It is often used as a child’s amulet, as the child is very vulnerable in a dream.

Malachite is great for creative people as it draws attention to the wearer. Also, this ability of the stone can be used by single people to find family happiness. Women will become more desirable in the eyes of men if they wear a ring or beads with malachite.

What signs of the zodiac suits malachite

This mineral will fully show its best qualities if its owner among all the signs of the Zodiac is Virgo or Scorpio. Libra malachite will give calmness and strengthen health.

The stone is also suitable for Taurus and Leo – people of these signs can safely wear jewelry with it. He will help the first in the fulfillment of desires, and the second – to make the right choice between family and career.

Cancers, according to some astrologers, should not wear jewelry with malachite.

What stones are combined with

Malachite is usually referred to as single stones. He encourages the owner’s asceticism in terms of jewelry and is best displayed alone. Despite its unfriendly status, this stone attracts love, inspires optimism and romance in the soul, and helps to build relationships with a partner.

Malachite reacts very painfully to the proximity to red and blue stones: aquamarines, garnets, lapis lazuli, rubies and sapphires. Tolerates onyx, serpentine and jade, but does not receive any bonuses from them.

The same thing that was said about stones is also true for metals. Malachite loves to solo, and frames weaken his energy.

As a last resort, you can use copper, traditional for Venus, or some discreet alloy that will not distract attention from the stone.

If you dreamed of malachite

In dream books, malachite is interpreted as a symbol of wisdom and knowledge. If a person is in search, a dream means a successful completion, if he wants to learn, the path to knowledge is open. If someone gives advice in a dream with malachite, then you should listen to him carefully.

Jewelry and products made of malachite are considered harbingers of the patronage of superiors. Broken jewelry – to the illness of a loved one. If a person saw in a dream that he was buying malachite, or this stone looked like a heavy, clumsy block, then he should be wary of the intrigues of ill-wishers.