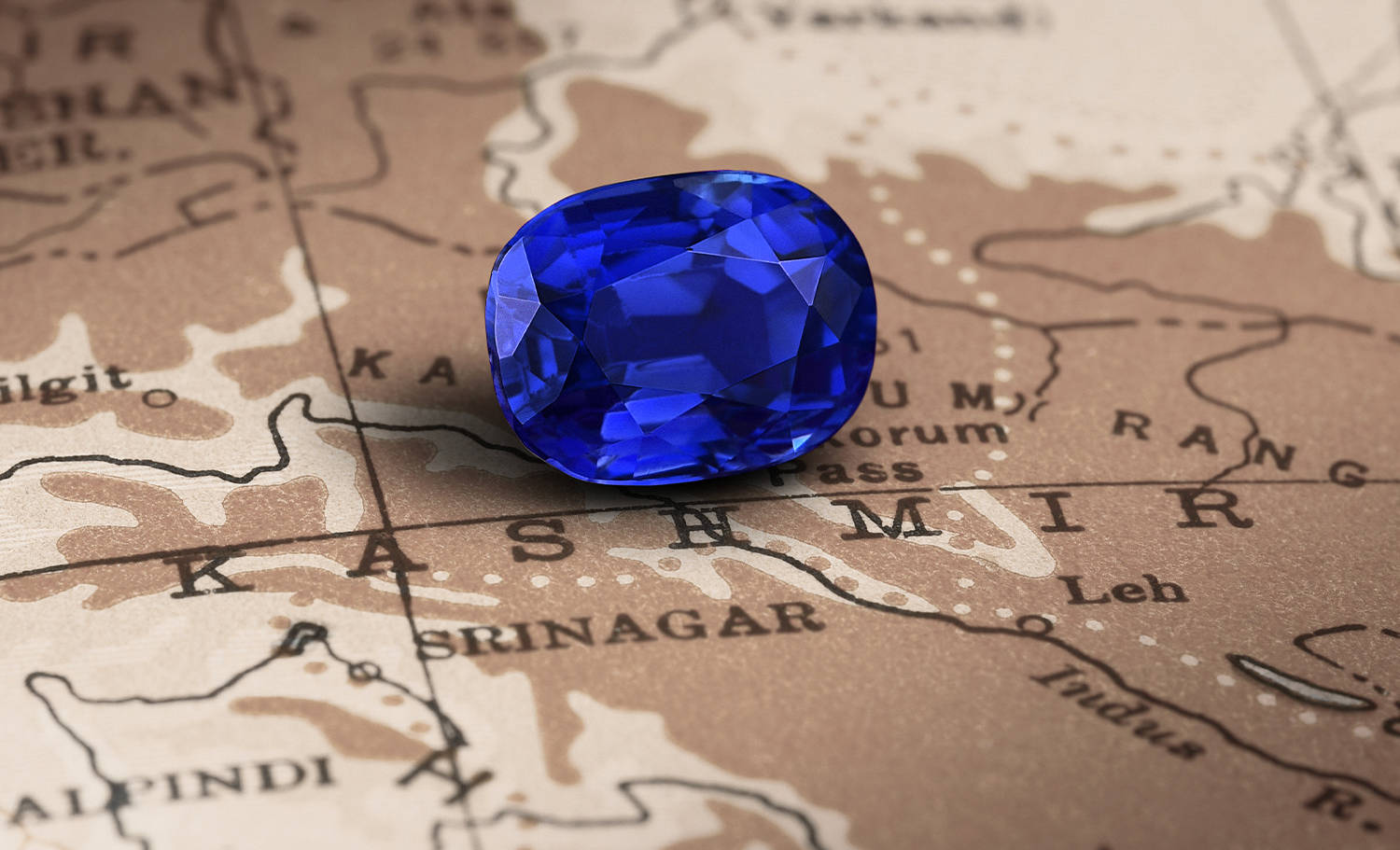 The most expensive and most mesmerizing sapphires from the Paddar Mountains continue to be unrivaled throughout the world. Although mining in the area ceased more than half a century ago, previously mined stones continue to be in the news about Kashmiri gems. David Atkinson and Rustam Kotavala, who visited the twin mines in 1981, offer a history of the find.

Because outsiders were strictly forbidden from entering the Paddar region of Kashmir until 1979, Dr. Kothawala’s previous attempts to visit the sapphire deposits were rebuffed. In 1981, he invited Mr. Atkinson to join him in a new attempt to reach the mines. Prior to the authors’ visit in the summer of 1981, the last Westerner to view the site was R. W. Gaines in 1944.

In 1961, the government of Jammu and Kashmir conducted a detailed feasibility study of the mines, but the results of this study remain confidential. One of the reasons for the decline of interest in these mines worldwide is the scarcity of gemstones mined after 1908. Such a shortage would have doomed the area to oblivion long ago, were it not for the unique beauty of the few stones that are still found.

Similarly, the inaccessibility of the mines is brightened up only by the reverent beauty of their surroundings. Even 19th-century geologists felt compelled to devote entire paragraphs to describing wildflower carpets and majestic landscapes in their otherwise meager reports.

Few gemologists would argue that the beautiful Kashmiri stone has a character that sets it apart in a world relatively abundant in corundum gemstones. Over the years, the term cashmere has come to refer to the most coveted and expensive blue sapphires. The protracted territorial dispute between India and Pakistan over the state of Kashmir, as well as the ban on the private trade in Kashmir sapphires since the early 1880s, introduced by the Maharaja, have led to the fact that the extraction and trade of these stones is surrounded by an aura of secrecy and suspicion. Add to this the extreme cultural isolation of the local population, whose small villages are nestled in narrow valleys among mountains over 6,000 meters high, and you have all the necessary ingredients to create a legend comparable to Shangri-La.

The purpose of this article is to describe specific conditions related to this area. In it we will attempt to describe the major events that have taken place at this site in the 100 years since its discovery, review the limited literature on the subject, and provide some insight into the very limited but ongoing trade in Kashmiri sapphires today. In addition, a brief commentary is given on the geology of the area and a discussion of the gemological characteristics of the Kashmiri stones.

As early as 1882 (Mullett) and 1890 (La Touche) reports from government geologists to the Geological Survey of India agreed that the discovery of sapphires above the village of Sumjam, on the southwestern slopes of the Zanskar Range, was the result of a landslide that occurred sometime in 1881. . Small earthquakes and avalanches often occur in this geologically active region. From various letters and reports from missionaries and traders living in the area at the time, it is clear that the locals were aware of several different corundum deposits.

Interviews with villagers during the 1981 expedition confirmed that the opaque, greyish corundum crystals had been used as flints and rough abrasive tools from very early times. The discovery in 1881 of a concentrated accumulation of precious blue crystals caused enough excitement among the locals to initiate an exchange with itinerant traders from the neighboring Zanskar and Lahoul valleys. After crossing the Umasi-La Pass (5290 m) to reach Sumjam in the Paddar Valley, these traders were initially skeptical and had to be persuaded to exchange the nile (blue stone) for salt on a weight-for-weight basis. Eventually, these stones made their way to the major trading centers, usually in company with more traditional and humble minerals such as borax and salt. It was in the shopping centers of Kullu and Simla (the summer capital of India) that the crystals were positively identified and recognized for their true value. The news quickly spread. By the end of 1882, a syndicate of jewelers had paid the equivalent of $90,000 for a shipment of fine crystals.

From these reports, it can be concluded that the early mining of sapphires was successful.

By 1883, the Maharaja of Kashmir declared that the mines were his by right and made all private trading in stones a punishable offence. Not surprisingly, the local paddari, out of touch with state affairs, were deeply indignant at the deployment of the maharaja’s elite guard, the dogra, to the mine. These sentiments still persist in the valley, where the authors had the opportunity to talk with both local residents and the police stationed at the mines. Until 1887, various government officials were sent to the mine to oversee the collection of sapphire on behalf of the state and prevent rampant smuggling and raiding in this area, which later became known as the Old Mine.

Their efforts brought great wealth to the state and led to the creation of a fabulous collection of crystals and precious stones, stored in the state treasury. Having started just as stormily, mining slowed down while the initial supply of sapphire was mined.

In 1887, the Kashmir Durbar engaged the Deputy Superintendent of the Geological Survey of India, La Touche, to conduct the first detailed survey and assessment of the future potential of sapphire mining. La Touche’s results were presented in his landmark 1890 report. Since then, only one comprehensive study has been published. More recent studies by various government agencies after Indian independence in 1947 and up until the late 1970s remain confidential.

However, his attempts to exploit the alluvial deposits already found at the base of the Old Mine yielded only one impressive stone, and the mine was abandoned for 16 years until the government leased it to private individuals.

The frequent change of tenants that followed showed that the combination of impossibly harsh mining conditions, constant raids by outsiders, and the lack of large crystals made mining less and less attractive. However, several interesting developments during this period indicated the future potential of the mines. La Touche reported finding loose blocks of corundum in a matrix on the northern slope behind the Old Mine, known as the “reverse slope”, but was unable to trace this material back to its source.

In addition, he suggested the existence of other alluvial deposits. So far, no success has been reported in finding these deposits. In 1906, C. M. Wright of the Kashmir Mining Company, a tenant of the mine, reworked an earlier alluvial deposit with some success before leaving the mines in 1908. As he left, he reported several new sapphire finds just a few hundred meters from the depleted Old Mine.

However, in his opinion, they did not matter much.

The failure of sporadic mining over the next decade to produce any interesting crystals seemed to confirm the view that the sapphire mines at Sumjam were definitively depleted. However, in 1924 the government commissioned a detailed mapping of the area, and several new sapphire outcrops were identified. In subsequent years, the second phase of production began at Novye Mine.

The results, while not as impressive as before, proved to be the most profitable for private operators – so much so that the government seems to have decided to take matters into its own hands again. In 1927, for “violations”, the private mining license was revoked and state mining laws were hastily revised. A government-controlled mining project that year produced the largest seasonal production in the area’s history. Proposals were made for the creation of a state cutting workshop, and the revival of the sapphire industry seemed inevitable. However, in 1928, an experimental batch of raw materials was cut in Delhi, and the results were analyzed. Of the more than 900 carats of finished stones, less than 20 pieces could be classified as stones of excellent quality, only two minerals were 6 carats and one 10 carats.

The new material was no match for the early stones. Tenders were therefore again accepted from private parties, and scant records indicate that before 1951 at least three different operators worked at the mine. Despite the large quantities of raw materials mined (over a million carats in 1949, when 50 workers were employed full-time during the season), only a small amount of “incomparable” sapphires was obtained. With the final weakening of the Maharaja’s political power in 1947, the last links between the Maharaja of Kashmir and the mines of Paddar broke off.

After 1947, the actual control of the mines is in the hands of the government of Jammu and Kashmir. Over the past 30 years, mining has been intermittent. In 1981, the mines were not operating, although at the time of this writing, negotiations are underway to lease the area for private projects.