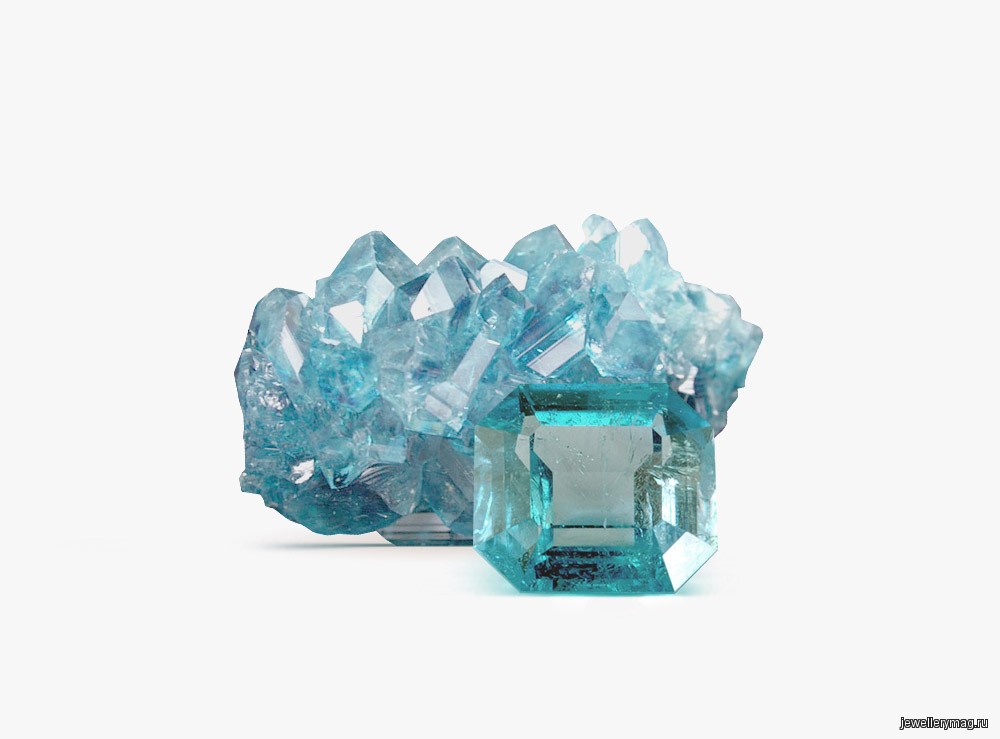 Euclase is a rare mineral and is a very fragile stone. Its name is literally translated from the Greek language – “well splitting”.

Euclase came to Europe presumably from South America in 1785. The first thorough study of the stone began René Just Gayuy in 1792. Then, in 1858, the research of the French mineralogist was continued by the Russian scientist Nikolai Ivanovich Koksharov, who discovered a large euclase crystal 7.3 cm in size in the gold mines of the Southern Urals (now it is stored at the Mining Institute in St. Petersburg). Since that time, researchers and collectors have been desperately hunting for this stone, but finding it was not so easy.

Until 1914, when the massive search for euclase was interrupted by the First World War, only 25 specimens of the mineral were discovered. Currently, most valuable euclases are kept in museum collections, and it is extremely rare in free sale.

Euclase is a silicate of beryllium and aluminum. The stone contains impurities of chromium, copper and manganese, which are responsible for the color of the crystals. The mineral is transparent, has a beautiful glassy luster. In some samples, the effect of pleochroism is observed: at different angles of rotation to the light source, the color of the stone changes from light blue and turquoise to deep blue.

Despite its high hardness – 7.5 on the Moss scale – euclase is quite brittle and difficult to process. Therefore, it is extremely rarely cut for jewelry – collectors prefer to keep crystals in their original form.

In nature, euclase is rare, mainly in the form of small polyhedral crystals no larger than 3 mm in size (sometimes up to 1.5 cm).

The mineral is mined in alluvial deposits near rivers, or in mountain hydrothermal veins. In Russia, the most valuable stones are found in the Southern Urals and Yakutia.

Also, a large deposit is located in Brazil, the state of Minas Gerais. Lesser quality stones are mined in Africa, India, Italy and the USA.

Healing and magical properties of euclase

It is believed that euclase endows a person with wisdom and insight, helps to learn not only from their own, but also from other people’s mistakes. The stone directs the flow of energy in the right direction, promotes concentration on the task at hand.

Euclase is a powerful magical stone used by practicing magicians and soothsayers. Psychics appreciate it for the ability to open information portals between times and spaces. Only a strong mature person can fully comprehend the magic of euclase, who can pass on his experience to a student or a new generation.

Euclase is a stone of peace and quiet, it pacifies, heals shattered nerves and mental disorders, maintains the strength of the elderly, delays the onset of old age and its accompanying diseases.

Who is euclase suitable for?

Euclase is more suitable for experienced people over the age of 45. Before young people, the wisdom of the stone is more difficult to reveal; on the contrary, it can distract them and encourage them to rebellion and waywardness.

It is best if the jewelry with euclase is inherited or donated by a loved one.

Astrologers believe that euclase suits several zodiac signs: Libra, Cancer, Capricorn and Gemini. For them, the stone will become support and support in all matters, will help to believe in themselves and their intuition.