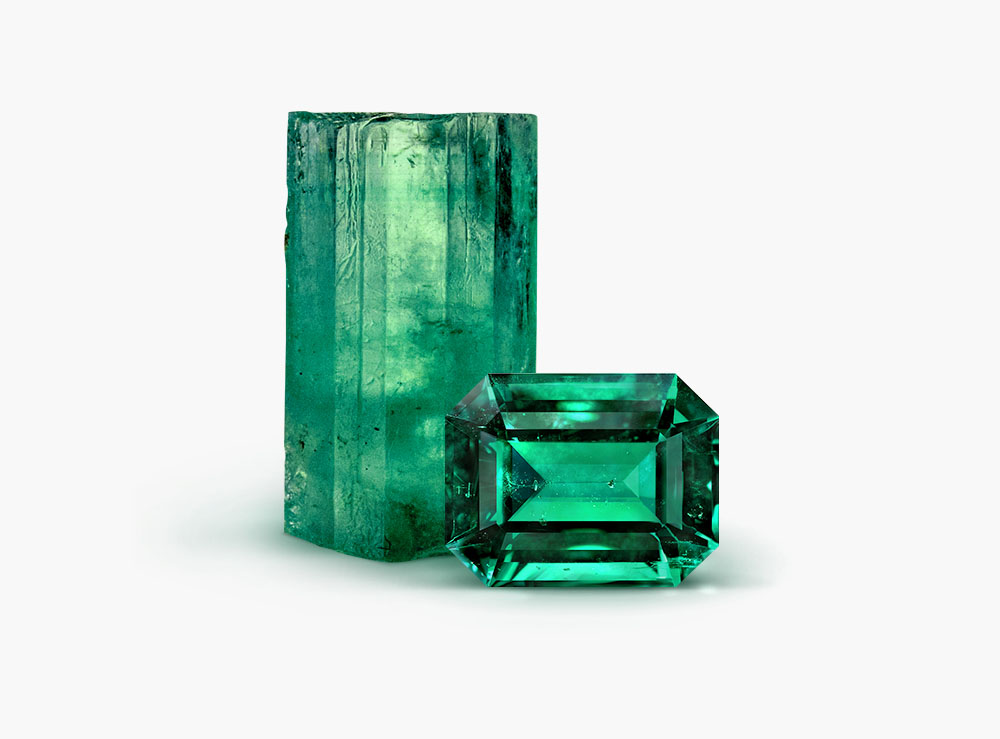 Emerald is one of the most valuable gemstones. In nature, it is rarely possible to find a completely transparent specimen. And such emeralds are highly valued. Basically, in these gems there are cracks, bubbles and cloudy areas. The colors of emeralds are most often represented by shades of green.

Now it is very difficult to determine when people first learned about this gem. After all, already in the IV century BC. The Babylonians traded in emeralds.

In addition, the emerald mines of Cleopatra are known, which were developed in the 300s BC.

Currently, the largest number of all emeralds is mined in Colombia. Zambian emerald deposits also have a fairly high rate: about 20% of the total number of these minerals are mined here. And in terms of quality, they are much better than Colombian emeralds.

The most famous, oldest and largest emerald deposit in Russia is the Ural emerald mines. Not only precious emeralds are mined here, but also alexandrite, apatite and other minerals.

As already mentioned, the emerald is a precious stone and is on a par with the diamond, sapphire and ruby. Therefore, the cost of the emerald is high. Even the lowest quality processed pale green stones with many inclusions cost from $40 per 1 carat, cabochons – from $13 per carat.

Dark green emeralds of good clarity and weighing 5 carats or more cost $1,000 per carat and up. The most exceptional representatives of green beryls are able to surpass diamonds in their price.

Read also
10 biggest diamonds in the world
Advertising – Continued below

As an example, consider the magnificent 18-carat Rockefeller emerald, which in 2017 was sold for 5.5 million US dollars. And two years earlier, the unique Piccadilly Princess Royal Emerald Green watch was released, literally woven from 245 Gemfields emeralds with a total weight of almost 32 carats. Their cost was approximately 2.3 million dollars.

According to legend, the blood of Christ was collected in an emerald bowl, and, subsequently, anyone who was given the honor to drink from it was instantly cured of all diseases. This vessel is now known as the “Grail” or “Holy Grail”.

The emerald stone is able to save the wearer from headaches, nightmares and insomnia. Helps to get rid of various types of psoriasis, infections and high fever. If you wear jewelry with emerald, they can enhance the effect of any treatment, as well as save the wearer from night blindness, various gastrointestinal diseases and cough.

It is believed that if this stone is placed in a container of water for at least an hour, the liquid will be cleansed of harmful microbes and bacteria.

The magical properties of emerald

According to people associated with esoteric teachings, if you meditate for a long time, looking at the emerald, you can see the future. After all, it is not for nothing that the famous tablets of Hermes, on which all the wisdom of the world is recorded, were made of a single emerald. It is believed that he protects the soul of a person while traveling through the Astral, and helps mediums to quickly contact the souls of the dead. There are also a number of other magical properties of this precious mineral.

The emerald struggles with the evil inclinations of its owner: laziness, craving for theft, debauchery, deceit. If a person continues to indulge in vices, then a stone, instead of help, can begin to harm its owner. And when his strength is exhausted, the emerald will crack.

If the stone is in the house, then over time its energy is cleared of negativity. The same applies to the person who constantly wears the jewelry with it.

Since ancient times, this green gem has been suggested to be worn by unmarried girls, because it helps to maintain chastity.

Emerald is a talisman for sailors and keeps them safe from storms. And for those who are looking for their love, he will help to find happiness and maintain harmony in the family, protecting them from betrayal.

Read also
10 Most Expensive Rubies From Auctions
Advertising – Continued below

What signs of the zodiac suits the emerald

Who suits the emerald according to the horoscope? in their astrological encyclopedia indicate that among the favorites of the gemstone are Leo, Cancer, Aries, Pisces, Sagittarius. Taurus can also wear a green gem – it will also benefit them.

With regard to “contraindications”, astrologers agree that contradictions with the emerald are likely to arise in Scorpio. For everyone else, the stone will show neutral properties: you should not expect much harm or great help from it.