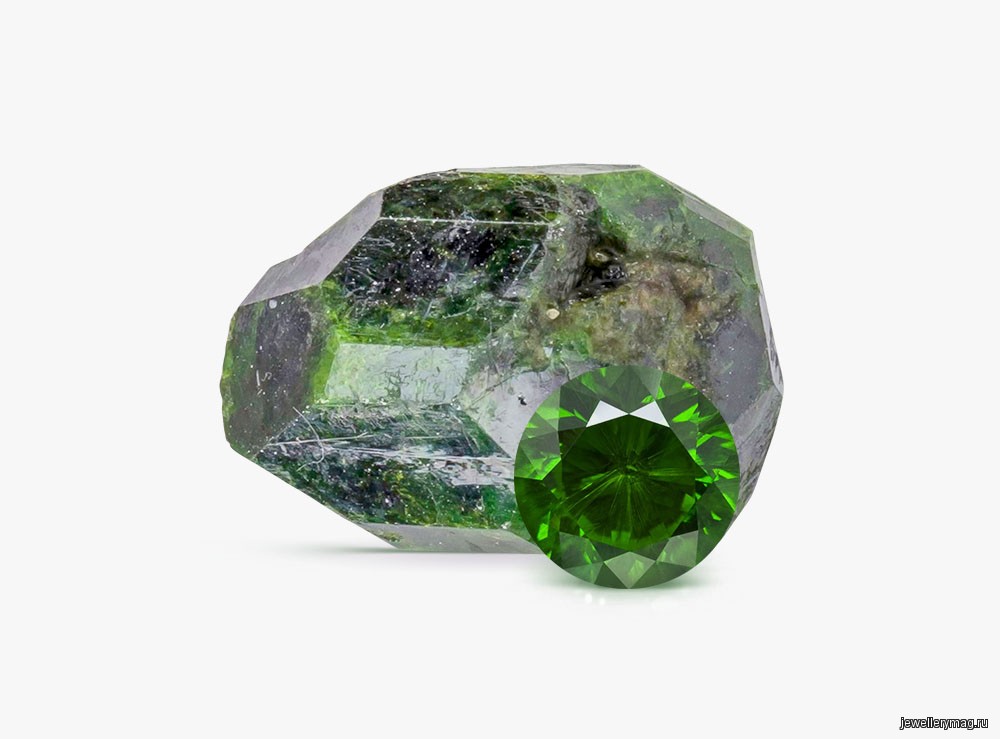 History of the demantoid

Demantoid is the most beautiful green garnet. In literal translation, the name of the stone means “diamond-like”. As soon as he became famous, he became a favorite of the Russian tsars and an indicator of the status of the court nobility.

This rare and expensive stone was appreciated and loved by Carl Faberge, and all over the world the demantoid was associated with the magnificent decoration of Russian palaces. Its rich green color still wins the hearts of the wealthiest people on the planet and connoisseurs of jewelry art.

For the first time, a stone resembling an emerald was found in 1874 in the Urals, and almost 20 years after a large jewelry exhibition in the capital of France, it received universal recognition and adoration.

Physical and chemical properties of demantoid

The chemical formula of a semi-precious stone is Ca3Fe2(SiOfour)3. Demantoid comes in many shades of green, but yellowish green, olive green, and emerald green stones are the most common. Iron, as well as chromium and titanium, act as impurities. The latter is responsible for the yellowish tint of the stone.

Demantoid has a very beautiful play of color (in this parameter it surpasses diamond) and good hardness – from 6.7 to 7 on the Mohs scale. The sizes of the stones range from a few millimeters to 10 cm; larger crystals are almost never found.

Demantoid is mined in different countries of the world. Deposits of this stone are discovered in Namibia, Pakistan, Iran, Kenya, Madagascar, Italy. Deposits of “green garnet” are found in Kamchatka and Chukotka. However, the minerals found cannot be compared in quality with those mined in Russia in the Middle Urals.

From the end of the 19th century to this day, these stones are called “Russian emerald” or “Siberian chrysolite” all over the world. The inclusions of byssolite, which create the effect of a “cat’s eye”, give a special uniqueness to the color of the Russian demantoid. Such crystals, except for the Urals, were very rare only on the territory of Pakistani deposits.

Healing and magical properties of demantoid

People have always seen in green objects something mystical, incomprehensible. Sorcerers and psychics considered the demantoid a strong amulet. In their opinion, the stone is able to protect from the evil eye, bring peace and harmony to the soul.

The owner of the stone is sure to succeed, it brings financial well-being and stability to men, and attracts the representatives of the stronger sex to women.

According to yogis, demantoid protects the heart chakra and normalizes blood pressure. It is also believed that with the help of this stone, impotence, infertility and some mental disorders can be cured.

Who is demantoid suitable for?

According to astrologers, demantoid is suitable, first of all, for representatives of the “air” signs of the Zodiac – Libra, Aquarius and Gemini. But the demantoid is categorically not recommended for Pisces, it is not their stone and can bring them big setbacks.

Read also
The effect of the cat’s eye: what is the play of light hiding?

However, those born under other signs of the zodiac can also wear a stone. But it should be noted that the brilliant demantoid does not like everyday fuss, and jewelry with this stone should be worn only on special, solemn occasions.