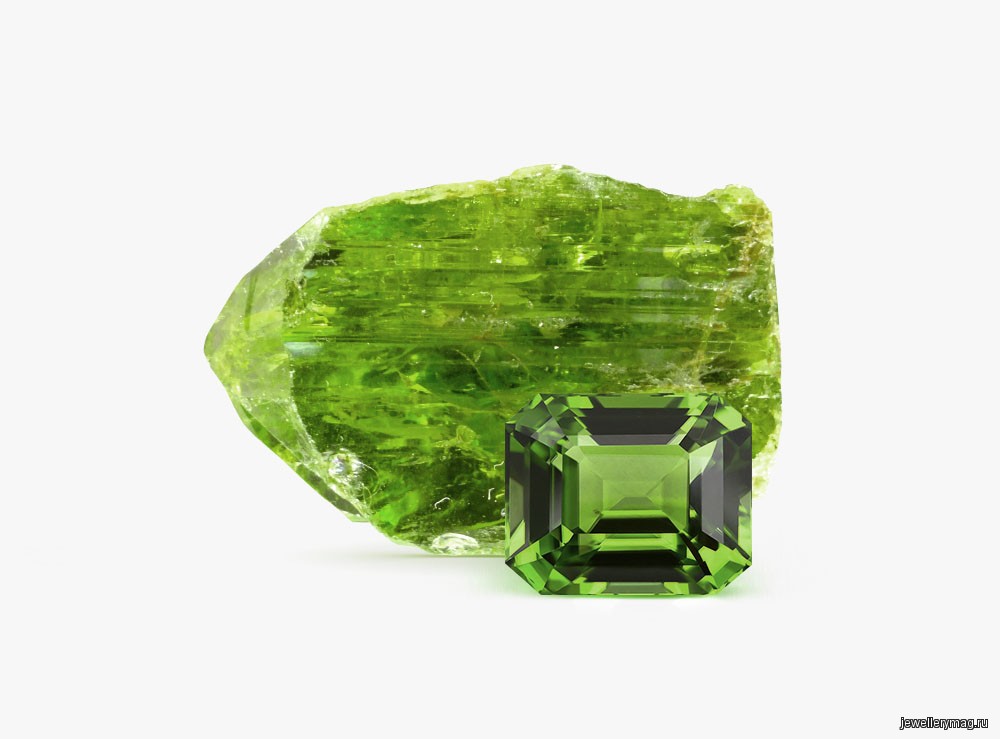 The golden-green semi-precious stone has been known to history since the 4th millennium BC. “Chrysolite” is translated from Greek as “golden stone”. The name was introduced by the Roman scientist Gaius Pliny in the 1st century, applying it to all minerals of golden hues. Since the time of Ancient Rome, another name has been attached to chrysolite – “evening emerald”, it appeared due to the inconstancy of the golden hue: clearly visible in the sun, it disappears under artificial lighting and the stone becomes almost indistinguishable from an emerald.

There are many references to chrysolite in biblical books; they were decorated with the clothes of the high priest and temples. The rare olive-green chrysolite of superb clarity and weighing 193 carats is one of the “seven historical stones” kept in the Diamond Fund of Russia.

Chrysolite is a variety of olivine, an iron-magnesium orthosilicate. Chemical formula – (Mg,Fe)2SiOfour. Often in the professional environment of jewelers and gemologists, it is called peridot.

The color of chrysolite is due to the presence of nickel, iron and chromium in its composition. The stone exists in nature in one color, only its shades can change slightly. At the same time, the more pronounced the pure green color in the stone, the higher its value and cost.

According to the Mohs scale, the hardness of chrysolite is 6.5-7 units. It is fragile and needs to be handled with care when cutting. The crystals have a vitreous luster with a slight “oily coating” that distinguishes it from other minerals of a similar color.

Olivines are quite common, but gem-quality chrysolites can be found far from everywhere.

In Russia, chrysolites are found in the composition of diamond rocks in Yakutia, the Krasnoyarsk Territory and the Murmansk Region, but there are few truly valuable specimens among them.

Abroad, chrysolites are mined in Pakistan, Afghanistan, South and North America, South Africa and Australia. The oldest deposit still being developed is in Egypt on the uninhabited island of Zeberget in the Red Sea. The largest and most expensive stones are mined here.

Healing and magical properties of chrysolite

Many beliefs and legends are associated with chrysolite. For example, in ancient India it was a stone of lovers, helping them find mutual understanding and strengthen feelings. And in the XIX century in Europe there was an opinion that chrysolite relieves male impotence.

The Mongols called peridot “dragon stone” and believed in its ability to bestow strength and courage.

And today people believe in the amazing power of chrysolite: that the stone brings success in financial matters and good luck in gambling. In addition, it is believed that if you keep it together with money, then there will always be prosperity in the family. And if you wear a ring with chrysolite on your left hand, it will protect you from the evil eye and help you make the right decision in the most difficult situation.

Healers often treated skin diseases with ointments with chrysolite powder. In the East, it was used to improve the process of hematopoiesis in anemia.

Chrysolite is perfect for active people who do not like to sit still: travelers, athletes, people of creative professions, whose life is connected with moving. It helps to quickly adapt to changes, a new place of residence and work.

Chrysolite will protect those who are connected with the financial sphere from dishonest partners and transactions. In addition, the stone is considered a talisman of lawyers, contributes to victory in disputes, and helps in the fight for justice.

What signs of the zodiac suits chrysolite

Astrologers advise chrysolite to people born under the signs of Sagittarius and Leo. But it is contraindicated for Aries and Gemini.

Chrysolite is a monogamous stone: having got used to one owner, it is unlikely to serve another well. Found or inherited jewelry can quickly be lost, or it will begin to bring bad luck.