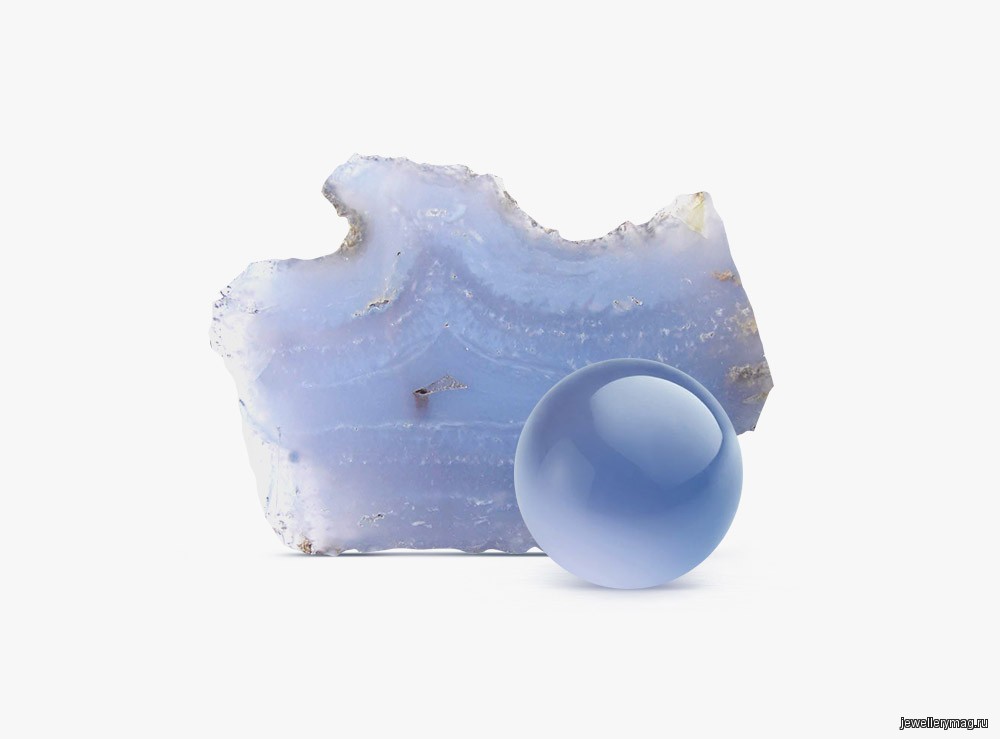 The chalcedony stone was discovered in Ancient Greece. The extraction of gems in this state was given special importance. Sometimes for the sake of conquering precious copies, real wars were started. And one of these cities rich in valuable minerals was Chalcedon, located on the shores of the Sea of ​​Marmara. The stones in it were mined in a variety of colors and shades, but they were identical in structure, because they were united by one name – chalcedony.

Mentions of chalcedony can be found in the Revelation of John the Theologian, where this stone is mentioned in the description of the walls of the heavenly city in Jerusalem.

The palette of chalcedony is very diverse: from pale shades to bright colors. The most common colors are yellow and white. The mineral is translucent, is a variety of quartz. Hardness on the Mohs scale is quite high – from 6.6 to 7. The chemical formula of the stone is SiO2 – silicon oxide with various inclusions of other oxides, iron, etc.

In the classical sense, chalcedony is considered quartz stones of light gray, blue, milky blue and pale lilac color. However, it is important to remember that in fact the mineral has a large number of varieties. We list the most famous of them:

On an industrial scale, stone is mined in India, Basil, Uruguay, Madagascar, and the USA. In Russia, gems are mined in Chukotka, Siberia, Transcaucasia, and also in the Crimea.

The most famous and oldest center for processing high-quality chalcedony is located in Germany, where there are also stone deposits. In addition, chalcedony is actively mined in Sri Lanka, the Czech Republic and Poland.

Healing and magical properties of chalcedony

Chalcedony is a feminine stone. Chalcedony amulets relieve melancholy and protect from bad words and the evil eye. With the help of this stone, evil spirits were driven away.

The healing properties of chalcedony are as diverse as its color. Lithotherapists “prescribe” chalcedony depending on its variety. It is believed that blue and green stones heal the nervous system, working as an antidepressant. They help with nervous exhaustion, and improve sleep.

However, it is important to know that chalcedony also has contraindications. Its long-term use impairs blood circulation, and sometimes can lead to dysfunction of the hematopoietic organs.

Who is chalcedony for?

According to astrologers, each zodiac sign has its own type of chalcedony. Pink and white varieties of chalcedony are recommended for Libra and Virgo. Black stones are suitable for Scorpio. Sagittarius is better to choose a red carnelian chalcedony.

An exception to the rule, perhaps, can be considered Aquarius – he can wear any kind of chalcedony.