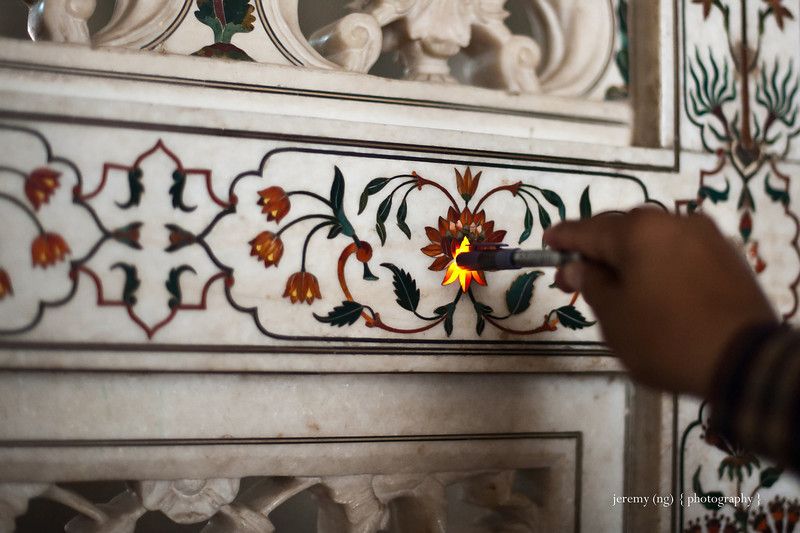 Did you know that Emperor Shah Jahan imported blue sapphires from Sri Lanka to decorate the walls of the Taj Mahal? Very few people know about it!

If you visit the complex, you can see the blue sapphire decorations on the walls of the Taj Mahal.

The Taj Mahal is a white marble mausoleum built by the Mughal Emperor Shah Jahan on the right bank of the Yamuna River in Agra.

It was built by order of Emperor Shah Jahan in 1632 AD. to house the tomb of his beloved wife, Mumtaz Mahal, who died on June 17 of that year while giving birth to their 14th child, Gauhara Begum. Construction was completed in 1653, and after the death of Emperor Shah Jahan, his tomb was also placed next to that of Queen Mumtaz.

Inside the mausoleum, in an octagonal marble chamber adorned with carvings and semi-precious stones, was the cenotaph, or false tomb, Mumtaz Mahal. The real sarcophagus with her remains was located below, at the level of the garden.

As the story goes, Shah Jahan intended to build a second majestic mausoleum across the Yamuna River from the Taj Mahal, where his own remains after death were to be buried; the two structures were to be connected by a bridge. But he could not complete the construction, as he was overthrown.

The Taj Mahal is built on a 17-hectare site that includes a mosque, a guest house and flower gardens.

History says that the construction of the mausoleum (Taj) was completed in 1653. The chief architect of the project was Ustad Ahmad Lahauri, and 20,000 artisans worked under him.

For the construction of the Taj Mahal, materials were collected from all over India and Asia. The story goes that over 1,000 elephants were used to transport building materials. More than 22,000 workers, artists, embroiderers and masons completed the construction of the Taj Mahal. It is believed that translucent white marble was brought from Rajasthan, jasper from Punjab, jade and crystal from China, turquoise from Tibet, lapis lazuli from Afghanistan, carnelian from Arab countries and blue sapphires from Sri Lanka.

Shortly after the completion of the Taj Mahal, Shah Jahan was overthrown by his son Aurangzeb and placed under house arrest in the nearby Agra Fort. After the death of Shah Jahan, Aurangzeb buried him in a mausoleum next to his wife, Queen Mumtaz.

On both sides of the mausoleum of white marble, there are identical buildings built of red sandstone. One of them serves as a mosque, while the other, the exact purpose of which is unknown, provides architectural balance.

The marble structure is crowned with an onion dome and surrounded by four minarets of the same height. Although minarets in Islamic architecture are usually associated with mosques—for the use of the muezzin who calls to prayer—here they are not functional but decorative, further highlighting the Mughal focus on structural balance and harmony.

Koranic verses inscribed in the walls of the building and patterns inlaid with semi-precious stones – coral, onyx, carnelian, amethyst, blue sapphire and lapis lazuli – add splendor to the snow-white facade of the Taj. The dominant theme of the carvings is floral, depicting some recognizable and other bizarre types of flowers, another link to the paradise theme.

Some elements of the Taj Mahal’s architecture combine elements from other Islamic traditions, but other aspects reflect elements of the local style. In particular, this is noticeable in the umbrella-shaped decorative chatrises (dome-shaped pavilions) on the tops of pavilions and minarets.

Most Mughal buildings tended to use red stone for exterior decoration and functional architecture (such as military buildings and forts), while white marble was reserved for special interior spaces or for the tombs of holy men. The entire main structure of the Taj is built of white marble, while the ancillary buildings are made of red sandstone. This white and red color scheme of the constructed complex may correspond to the principles laid down in ancient Hindu texts, in which white meant purity and the class of priests, and red meant the class of warriors.

If his accession to the throne was smooth, then Shah Jahan’s departure from him was not smooth. The emperor died not as a ruler, but as a prisoner. Imprisoned in Agra Fort under house arrest for eight years until his death in 1666, Shah Jahan could only enjoy a distant view of the Taj Mahal. But the magnificent marble mausoleum that he built “with posterity in mind” has survived to this day, more than 369 years after its construction, and today is considered the most recognizable landmark in the world.

During the restoration period, the garden was redesigned, European-style lawns appeared in it, which have survived to this day.

The Taj Mahal is one of the world’s greatest tourist attractions, hosting millions of visitors a year. Although it was listed as a UNESCO World Heritage Site in 1983 and is currently under the supervision of the Archaeological Survey of India, heavy visitor traffic is just one of many factors threatening the integrity of the site.

A car ban has also been placed near the Taj Mahal, air quality monitors have been installed, and the Archaeological Survey of India has proposed capping the number of tourists and increasing entry fees to limit visitor exposure.

Another potential risk to the Taj Mahal is the drying up of the Yamuna River, which runs along the back of the complex. The river has been partially impounded upstream of the Taj Mahal to increase the city’s water supply, and some argue that soil changes due to lower water tables may threaten the monument’s structural integrity. Experts claim to have found cracks in the marble platform, lowering of the structure and overturning of the minarets.

The Taj Mahal is rightfully one of the top destinations for millions of travelers. Over six million tourists visit the Taj Mahal every year. As world tourism rises and economic pressure on industry continues to increase, the authorities overseeing the site should strive to put in place legal and structural measures to ensure that this seemingly irreplaceable monument is ipso facto preserved.