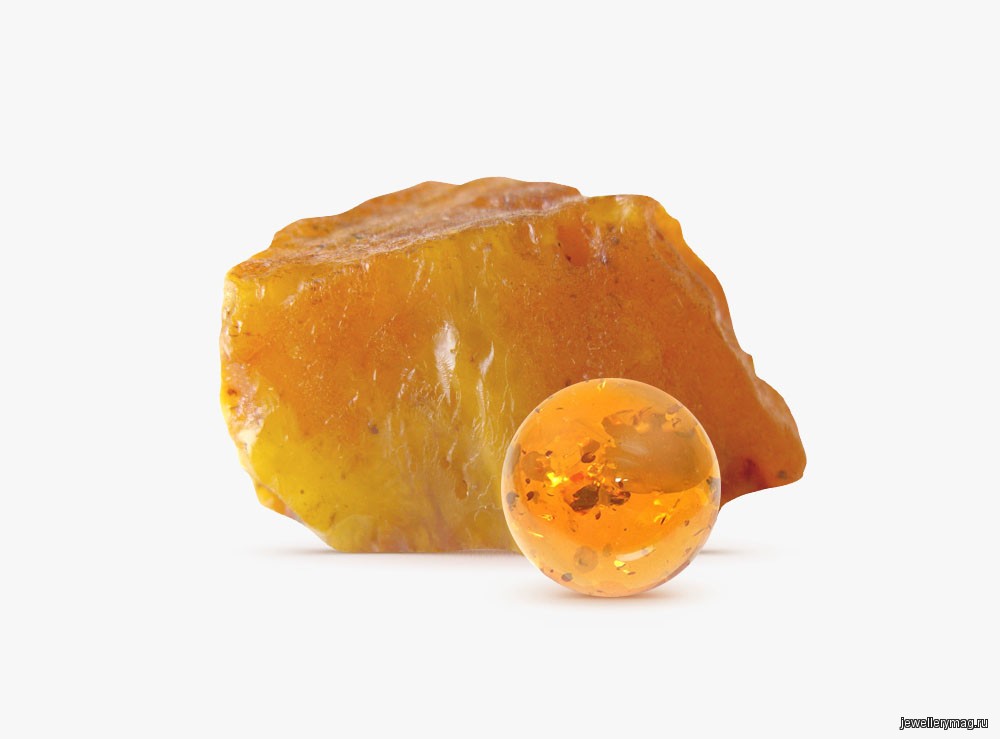 Pliny the Elder became interested in the question of the origin of the unusual sunny-orange “stone” almost two thousand years ago. After careful study, the ancient Roman writer came to the conclusion that amber is a tree resin. Of course, there were other hypotheses, for example, that amber is a kind of natural bitumen. However, in the middle of the 18th century once again spoke (and provided evidence) that amber is a completely organic product.

The name of the stone familiar to us appeared in the 16th century: first in the form of the Old Slavonic “gentator”, then “gintaras” in Lithuanian, turning into then into “amber”. In German, amber in the 13th century was called “burning stone”: to use its healing properties, the stone was set on fire and its smoke was inhaled.

Despite the fact that various inclusions in the form of insects may seem like a lack of amber, in fact, it is precisely such specimens that are of great value among collectors.

Physical and chemical properties of amber

Amber is a fossilized resin – mostly coniferous trees. The average age of amber is 40-50 million years, and the color varies from almost white and pale yellow to brown, with green shades being of particular value. The most rare and expensive is blue amber.

The hardness of the unique stone is quite low – from 2 to 2.5 on the Mohs scale. The density is also very low and ranges from 1.05 to 1.09 g/cm3in the most rare cases it can reach 1.3 g/cm3. Amber often has foreign inclusions and impurities, including iron, nitrogen, aluminum, and sulfur. The main chemical composition of amber is a mixture of carbon, oxygen and hydrogen, the formula is CtenH16O.

Amber ignites easily on contact with an open flame and emits a characteristic coniferous smell. In addition, it electrifies with intense friction. And despite the fact that this stone is very delicate and easily damaged, there is a special variety of it, which is even cut – this is Burmese amber or birmite.

Read also
Blue amber is the rarest amber in the world

The largest and most famous amber deposit is Palmnikenskoye in the village of Yantarny, in the Kaliningrad region. Mining takes place with the help of water: powerful jets break the soil in which the deposits of amber are located.

Amber is also found in small volumes abroad, including in the USA, Canada, Mexico, Romania and the Dominican Republic, where the rarest blue amber is also mined. Also, three deposits operate on the territory of Ukraine.

Healing and magical properties of amber

Amber is one of the valuable jewelry stones, whose beneficial effect on the human body has been officially confirmed. And if earlier it was mixed with water in various ways (for example, ground into powder) and this healing liquid was taken, today succinic acid is prepared from it. The latter is used as a powerful immunostimulant that helps fight inflammation and severe stress.

In addition to general healing, amber was used to whiten teeth, cure diseases of the gastrointestinal tract, headaches and the respiratory system. In addition, it was previously believed that the stone helps to improve the functioning of the thyroid gland.

Magical properties have been attributed to amber almost from the moment the ancient peoples began to use it – at least five thousand years ago. In many myths and legends, the stone was associated with the Sun, even considering it to be frozen pieces of the ether of the heavenly body. Amber, in which lizards and insects got stuck, had special power in the eyes of magicians – such stones were used in various ceremonies and rituals.

It is believed that amber is able to bring great luck to its owner, endow him with vitality, vigor, make him “glow from within”. A sun stone will relieve depression, give happiness and mutual love, if a person’s thoughts are pure.

Amber is a unique link between the past and the present, the keeper of the memory of times distant and almost inaccessible to study. That is why the stone is considered the most successful talisman for those whose life and work is directly related to the study of bygone days – archaeologists, geologists, philosophy teachers and historians.

What signs of the zodiac suits amber

Here the recommendations of astrologers may seem obvious enough. Sunstone is the best fit for people of Fire, especially Leo.

Amber is not contraindicated for the signs of Water and Air, but Taurus should be very careful with it: amber is not the best choice for him.