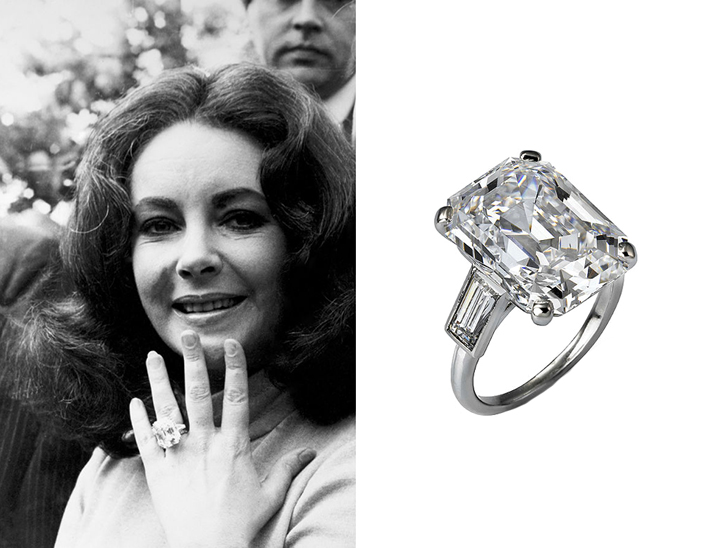 It’s no secret that famous people in Hollywood, members of the royal dynasties and beautiful ladies who were about to marry representatives of the royal estates received exclusively large gems for their engagement. This is due to the fact that men for such an event chose only the best jewelers, ordered gems from abroad, bought jewelry at auctions for incredible amounts, and also took part in the creation of jewelry, namely engagement rings.

Consider with you the 10 most famous such rings in the history of mankind.

It is worth noting that at one time Elizabeth II received such a ring as an inheritance. At the time when she was a princess, she managed to win over Lieutenant Philip Mountbatten on her own. Some of the diamonds in this piece of jewelry came from the tiara of the future husband’s mother. The Duke himself came up with a sketch of the ring and drew it on paper. His order was carried out by Garrard masters. If you plunge into history, it will become known that the finished platinum ring for the princess was not the right size. It constantly wanted to slip from her finger. This continued until it was given to jewelers to be adjusted to the size of the finger. It is worth noting that this ring is not the largest piece of jewelry in the entire collection of the Queen, but she wears it all her life, almost never taking it off.

When Prince Rainier III of Monaco proposed to his beloved Grace Kelly, he failed to guess the size. The ring from Cartier, made using rubies and diamonds, at first glance, did not seem too impressive for him. After he saw the jewels of Hollywood beauties, he immediately gave his bride a piece of jewelry, which was made of white gold with a 10.5 carat diamond, placed in an emerald cut. This stone was surrounded by two baguettes. At the moment, the cost of jewelry by experts is estimated at a little more than 4 million. dollars. In 2013, after receiving the consent of the royal family, the jewelry house Cartier made a copy of the same Grace Kelly ring. This was done for the filming of the movie “Princess of Monaco”.

In principle, this ring is not an engagement ring, but it is famous. This amazing gift to the actress was made by her husband Richard Burton. He bought the piece of jewelry at an auction in New York. The cost of the jewelry is $300,000. It consisted of a diamond, which was a fabulous size just over 33 carats. This decoration has become a symbol of the relationship between the actress and her husband. She wore the ring all the time. She shone in it in a large number of films. In addition to this historical fact, the ring also had its own history. Before Elisabeth, it was worn by the wife of a famous German industrialist, who during the war was one of the sponsors of the Nazis. The actress always said that “she, like a good Jewish girl”, wears this jewelry in memory of her own people. After the actress passed away, the piece became known as the “Elizabeth Taylor Diamond,” and in 2012 it was sold at an auction in New York for nearly $9 million.

The engagement ring of this amazing woman simply could not be left out of this list. Back in 1953, at dinner in a restaurant, John F. Kennedy gave his beloved the most beautiful gift. He presented her as a gift with a precious product, consisting of two large stones, which were placed in a baguette cut. There was an emerald and a diamond, which are 2.84 and 2.88 carats respectively. Along the edges of the decoration were petals made with diamonds. After the marriage of Jacqueline and Kennedy, she made the decision to exchange baguettes for diamonds. Probably wondering how many of the fair sex would like to wear this ring. The ring is valued at $1.4 million.

Natalie Wood and Robert Wagner got married twice. They were in a rather complicated family relationship. Their marriage ended tragically. In 1981, the actress died. Their romance developed very rapidly and rapidly. This girl was of Russian origin. When she was nineteen years old, Wagner proposed to her in a very original way. He told the waiters to put the ring in a champagne glass, which is where she found it while dining with Robert in Los Angeles. This piece of jewelry is quite original. There is a large pearl, framed around with small diamonds. It is noteworthy that the daughter of this married couple, after growing up, became a jeweler.

While other famous rings impress with their custom sizes and gemstones, this same piece of jewelry has an original design. It lacks wealth through measures. The ring contains 35 diamonds set in a platinum hoop. Thus, a kind of rim is obtained, which sparkles when light hits it. Despite the fact that the actress was married to a basketball player for no more than a year, the history of the ring is longer and is over 60 years old. During this period, it managed to be resold twice. The last time this piece of jewelry, which no longer contains one diamond, was put up for auction in California. The starting bid was $300,000.

When Kate and Prince William got engaged, she was given a ring worn by Princess Diana. It is made of white gold with sapphires and surrounded by 14 diamonds. It is worth noting that the sapphires on the ring were 12 carats in size. This piece of jewelry was chosen by Princess Diana in 1981. At that time the British subjects were divided into two groups. Some disagree with Diana’s display of modesty. After all, the cost of the ring was not expensive. Others were of the opinion that the presence of excellent taste and the manifestation of an independent character are the qualities that a future queen should possess, rather than the manifestation of extravagance. She did not part with the ring even after breaking up with Prince Charles. After the death of the princess, the ring passed to Prince Harry, but he gave it to his older brother when he decided to marry. It is worth noting that the future Duke of Cambridge, during his stay with Kate in Kenya, carried it with him in a backpack for 3 weeks, so as not to lose it.

The engagement ring of this actress is famous both for its design and the duration of its production. Jewelers worked on the creation of this ring for a whole year. Brad Pitt himself took part in this process and kept everything under control. He participated in the order of the highest quality emerald-cut diamond. But it seems that the actress did not really like this massive decoration. She took it off when she traveled to African and Asian countries, replacing it with a much simpler ring made of gold.

It is worth noting that it was not without the direct participation of the beloved actress Benjamin Millepied in the creation of such a beautiful ring. Under his leadership, one of the famous jewelers, who was also a friend, made an original piece of jewelry. Here the preferences of the actress were taken into account. The ring contains an old diamond, which is surrounded by small diamonds. The bezel of the ring is made of recycled platinum. Fans of Natalie Portman liked this jewelry, which suits her very much.

As we all know, Kim Kardashian received a marriage proposal from beloved Kanye West on her birthday. He decided to propose to Kim to be his wife at a baseball game in San Francisco. Probably, few people know that the guy himself took part in the production of jewelry. A pure diamond is placed there, the size of which is 15 carats. They decided to place it on the rim of the ring, which is decorated with diamonds. Kim Kardashian often shared with members of the media that Kanye did not sleep for many nights until he found an understanding with his jeweler. After all, he set a goal for the jeweler, so that the diamond on the ring looked like it was floating in the air. Only after a few months of fruitful work did Kim Kardashian begin to wear the ring, which according to some sources is about two million dollars, on her ring finger.